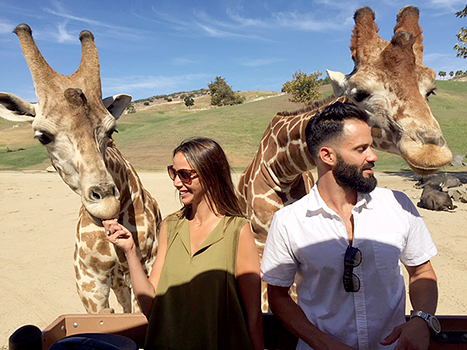 First of all, I just returned from Black Rock City, Nevada from the Burning Man Art Festival where I thought SURELY the cast from Vanderpump Rules would be stirring up brand-new situations–reason being Burning Man is like Coachella on steroids and draws a very similar crowd and given the gangs passion and loyalty to Coachella, I thought surely they would be at Coachella 2.0.

So I was shocked when I returned home and saw the gang was enjoying a very mild-mannered Labor Day weekend at the San Diego Zoo and Wild Animal Park!!

Anyhow I also returned home to the news that cougar Kristen Doute, 32 and young boyfriend James Kennedy, 23 have broken up for good.

But not only had they broken up, Kristen had already moved on to a new flame whom she met on the dating app Bumble.

On Wednesday, Sept. 2, she shared a photo of herself with a girlfriends at the San Diego Zoo Safari Park with friends and her new boyfriend captioned….. “The best day of my life.”

Her beau’s name is Brian Carter, and it looks like we will get to watch her relationship with James Kennedy crumble on season 4 of Vanderpump Rules which airs November 2nd at 9pm on Bravo.

Thankfully this new drama will play out on season 4 of Vanderpump Rules.

Don’t feel too bad for James, he has moved on as well.

Who is Bachelor Australia Snezana Markoski?