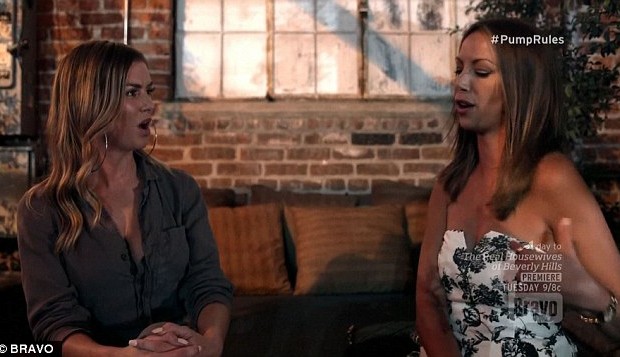 Kristen Doute is now seeing the antics of ex boyfriend James Kennedy play out on national television and suffice it to say there is no love lost between the two of them. In fact Kristen is now doing a press tour in order to blast James and his new girlfriend, 25-year-old model Lala Kent.

It started when James cheated with Jenna Willis at Scheana’s 30th birthday party, but James didn’t stop there. He also cheated with Lala Kent before he broke up with Kristen — although to be fair James was certain that Kristen had hooked up with a 35-year-old guy in Detroit after a photo shoot.

Everything went south after Kristen went through James’ emails and discovered the ‘smoking gun Uber’ receipt.

Anyhow now that the relationship is totally dunzo and both have moved on, NO ONE is taking the ‘high road’ (thank God). Kristen, 32, spoke to OKMagazine.com about James’ new relationship with Lala.

“That girl is on her own,” Kristen said. “She’s already bitten into the poison apple and she seems to be enjoying it so she can take my sloppy seconds and make her music.”

She doesn’t stop there, alleging the two of faking their romance —

“I just feel their relationship, if you want to call it that, is completely inauthentic.”

And she may not be wrong on that point. I found it very confusing when James claimed that he was totally single on the After Show which was filmed in real time, since he and Lala have been claiming they are dating all over social media — especially because Lala did not seem remotely in to James on that show.

As a side note, I also think that Doute is feeling threatened by the new young cast-members. After all how much longer can Doute keep bringing’ the crazy before her stint on the show is over?

So no wonder Kristen is also dissing Lala flirting with bartender Jax Taylor calling it “boring” and a “sham.”

Again she may not be wrong on that point either since now Lala is saying that no way she would sleep with Jax.

Kristen has also been accusing James Kennedy of using her for fame. Ben Higgins talks about his insecurities and his upcoming Bachelor season