Sean and Catherine Lowe are pregnant! 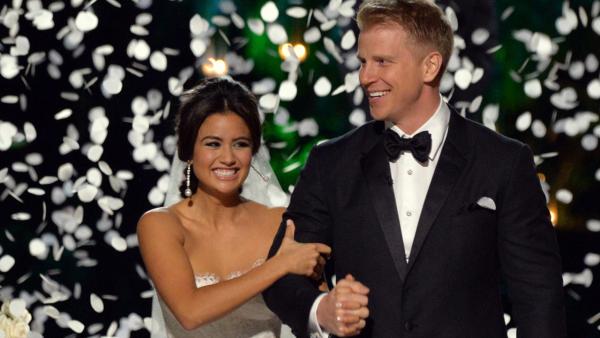 Congratulations Bachelor nation! We are pregnant again! Sean Lowe, 32 and Catherine Giudici, 29 just announced that they are expecting their first child together. Ever since fans saw ‘consummation station’ almost 2 years ago on their televised January wedding fans have been eagerly awaiting news that they are expecting.

Sean announced on a photo posted to his Instagram account “It’s happening! I’m going to be a dad!”. Catherine also posted a photo, along with the caption “Hey baby…” No doubt these two will have gorgeous children. Catherine is half filipino on her mother’s side and half Scottish and Italian. And Sean is just as caucasian and aryan as they come. Check out his adorable baby pics.

Wow! We have been waiting for this announcement for two years! I guess their marriage can’t be that troubled!

The two star on the current season of Marriage Boot Camp: Reality Stars — sort of ironic.

New Bachelor Ben Higgins weighed in on the recent news about Sean Lowe and Catherine Giudici expecting a baby.

“I’m really happy for (Sean) and (Catherine). I think they are a great representation to a lot of people on how a marriage works, how relationship works. I know they were both big influence in a positive way for me as I step into this experience. You know, I think just in life, we could all I mean, I guess we can all look at their, their relationships. Do you know, that’s something to kind of not strive for but something that’ll be nice to have, just unconditional love between two people.”

But they also allegedly try to walk off the show insisting their marriage is not in trouble, but the director convinces them to stay.

The two were married at The Biltmore hotel at the Four Seasons Resort in Santa Barbara, California in January of 2014.

They are Baptist Christian and both believe in full immersion baptism. So their baby will obviously not be baptized until the age of consent.
Congratulations Sean and Catherine!