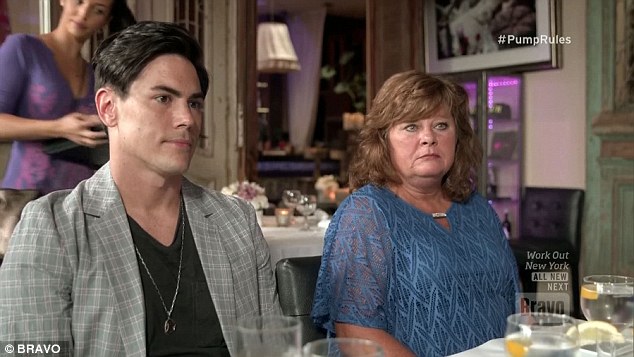 Last night after 4 seasons of Vanderpump Rules we FINALLY got to meet Tom Sandoval’s mom Terri Sandoval and she is very interesting.

Who would have thought that such a girly man like Tom would have such a badass mom, but he does. Terri Sandoval now Terri Marie Green, 56 was a firefighter in St. Louis Missouri for 28 years. Not only was she a fire fighter, she was “firefighter of the year” for the rescuing a man from a burning apartment in August of 1996.

In 1997 she was honored for her bravery by the Creve Coeur fire department. Here is an excerpt from the article in the St Louis Post-Dispatch.

“She is the first woman the local has selected for the award, union officials say. According to reports filed at the time of the incident, Sandoval felt the unconscious man’s arm as she crawled into an upstairs bedroom in the Warson Village Apartments. “It was super hot, and my head felt like it was expanding,” she later wrote in her report. After she and fellow firefighters Pvt. John Henderson and Capt. Donald Sleet pulled the victim to safety, they gave him mouth-to-mouth resuscitation. The man, Mark Robertson, spent several weeks in the burn unit at St. John’s Mercy Medical Center in Creve Coeur but was recovering when Sandoval visited him about 10 days after the accident. “He was hoarse and couldn’t talk very well and sort of teary-eyed. He said, `I can’t begin to thank you enough,’ ” she recalled.”

“One such outcome occurred recently when Firefighters Local 2665 picked a woman as its Firefighter of the Year. She is Terri Sandoval, mother of two teen-age sons, who simply says she was “just doing my job” when she helped to rescue a man from a burning apartment last August. No doubt she hasn’t asked for any special treatment, but she certainly must have expected to work in an environment where the playing field is level to the point where she, too, has a shot at tough assignments requir ing heroic feats and winning her union’s top award as well. …” “My Mom, Terri Green is Officially RETIRED from Creve Coeur Fire Protection District! First woman to be awarded “Firefighter of the Year” in Saint Louis County in 97 And received “Heroism Award” from Fire House Magazine! My Mom: A Hero, an Example, and all around Badass…. I couldn’t be more proud!”

She divorced Tom’s dad Anthony when Tom and his brother Brian were very young. She has since remarried Michael Green and lives in St. Charles, Missouri.

No wonder he is proud. I am seriously impressed. Thanks for your service Terri!