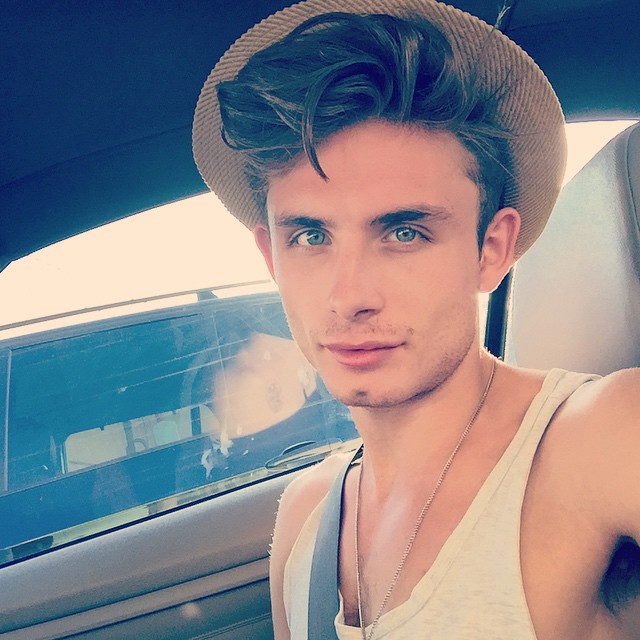 23-year-old Vanderpump Rules’ James Kennedy is really center stag on season 4 of Vanderpump Rules (much to the chagrin of the OG cast-members). James was not well liked by his fellow SUR-vers (except for by ex girlfriend Kristen Doute), with his brashness, his Beemer selfies, and his name-dropping, but now he is actually getting interesting now.

This season we learned that he likes to be scratched and bitten during sex, that he is a pretty talented musician and that he descends from music royalty–that’s right James’ is the Godson of pop singer George Michael, 53.

So who is Vanderpump Rules’ James Kennedy?

Well he was literally born in to the music industry — practically right in to a London nightclub. His mother is a famous Elite model and actress named Jackie Georgiou, 45 and his father is a bit of a music legend managing the record label of his childhood friend singer and Wham frontman George Michael, Andros Georgiou, 53.

James was christened at a Greek Orthodox church.

He was raised in London for fourteen years and then moved to Ibiza, Spain for two years before coming to the US. After moving to the US he attended and graduated from Beverly Hills High School.

James has a 21-year-old brother named Harry Georgiou who is also the Godchild of George Michael.

His parents are friends with show producer Lisa Vanderpump and Ken Todd.

He started as a SUR busboy — probably because he is best friends with Lisa Vanderpump’s son 23-year-old Max.

Despite his young age James is actually a very accomplished DJ and producer. He toured with Eric Prydz, Porter Robinson and Steve Aoki. He has also tried his hand at modeling.

Of course we know that his ex girlfriend is 32-year-old Kristen Doute, but that he also has hooked up with Jenna Willis, Lala Kent and hostess Lauren.

3 thoughts on “Who is Vanderpump Rules’ James Kennedy?”