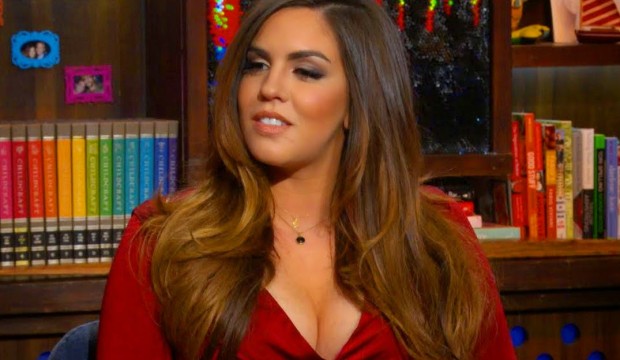 Vanderpump Rules star Katie Maloney was a bit overshadowed in the first two seasons of the hit show by the antics of co-stars like Jax Taylor and Stassi Schroeder. She came off as a bit timid and needy, but now in the 4th season she has really come center stage.

Last year she dumped BFF Stassi Schroeder and gave commitment-phobic co-star/Sur-ver/boyfriend Tom Schwartz an ultimatum–that he better put a ring on it or she was outta there. So this year one of the shows main story-lines was about Tom’s planned proposal.

The two survived some serious cheating scandals and the likes of Jax Taylor telling Katie what Tom was saying about her behind the scenes.

I have to confess at first I was not that inspired to investigate Katie’s background, but this season I was and I found some interesting stuff about the 29-year-old hostess….

Yep Katie is not an Angelio, she is a transplant. She moved to Los Angeles more nine years ago to pursue an acting and modeling career.

2. Her brother is also pursuing a career in the Television and film business. Yep, so don’t expect to see Katie waiting tables if you head to SUR. Sounds like she is barely ever there. I suspect that’s the case with most of these break out stars. I mean really, why would they keep hostessing at SUR when they have so many other, more lucrative opportunities now? NTM sounds like there salaries for appearing on the show could be as high as 6 figures a season.

She is working on her own style blog Pucker & Pout. And she is seriously passionate about music and worked at some record labels when she first landed in LA.

4. She was single the first 4 years she lived in LA.

Yep, despite being attached to boyfriend and now fiancee Tom Schwartz at the hip since we met her, she was single for a long time before finding her BF.

Yep, both Katie and Stassi dated SUR manager Peter Madrigal which is pretty funny if you saw how awkward poor Peter was on his date with Vail Bloom.

6. She suffered a brain injury after falling 25′ through a plate glass window. She has a tattoo on her inner arm that says 11/09/09 marking the date that the terrible accident occurred.