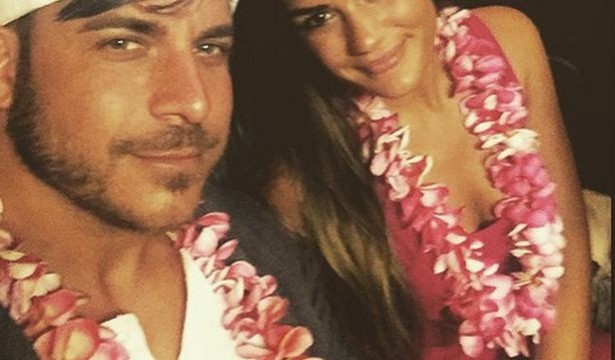 On Monday night the cast of Vanderpump Rules takes off to Hawaii to celebrate some birthdays but one cast-member Mr. Jax Taylor aka Jason Cauchi gets in to a bit of a situation and gets arrested for stealing a pair of $300 sunglasses in Honolulu, Hawaii.

At first I thought the situation had to be a publicity stunt orchestrated by PR genius and show producer Lisa Vanderpump, because NO one could be that dumb. But I think Jax Taylor maybe could just be THAT dumb.

The 36-year-old reality star was arrested on Friday, July 17th after returning to his hotel with the $300 shades and book on charges of felony theft. And if you watch the surveillance video it looks like Jax definitely conspired to heist the expensive shades.

Jax was with girlfriend, model Brittany Cartwright (who just moved to LA to be with Jax and also has an arrest record BTW).

But have you seen hot Jax aka Jason’s mugshot is?! I mean if you are going to get arrested it’s definitely a big plus to be in Hawaii with a fresh tan. Jax looks amazing and somehow I doubt that he learned a lesson. Incidentally this is not Jax first run in with the law. His arrest record goes back 14 years to 2001. In fact Tom Sandoval seriously hinted that Cauchi, back when he was Jason Cauchi had an arrest record in Florida as well.

Jax Taylor’s girlfriend Brittany Cartwright has an arrest record too!