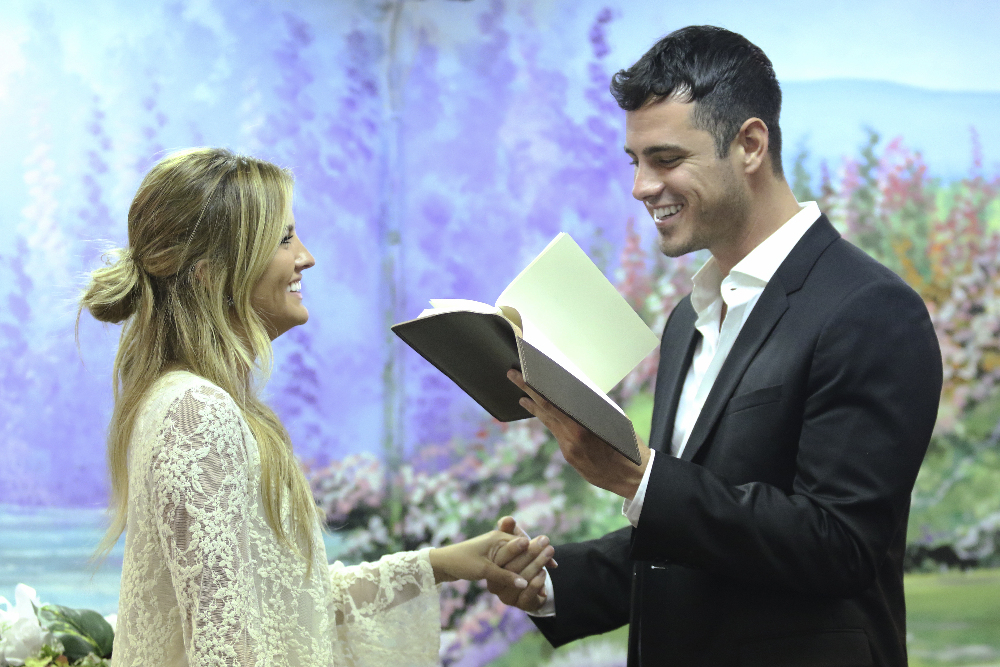 Becca Tilley has been crushing on Bachelor Ben Higgins from the minute he landed on Kaitlyn’s season and proudly told Britt Nilsson that they both sponsored children in 3rd world countries. Becca is a serious Christian woman looking for a serious Christian man so she really wanted to be on this season of the show–unlike Chris Soules season where Becca looked like she was in a hostage situation the whole time looking for an escape.

The only question was, was Ben interested in Becca? On Monday the two spent their date marrying couples in a Las Vegas chapel because Ben is of course an ordained minister.

In his People blog Ben talked about his 1 on 1.

“I was so excited for a date with Becca the next day. From the day she walked into the mansion I knew there was something special about Becca. I know Chris Soules felt it, too, and when you are in the same room with Becca it is undeniable. She has such a fun energy about her and I knew that she would be perfect for this date. Plus I knew because of the faith we both share that it would be meaningful to her.

I was so nervous for this though. I mean this was a day that these couples were going to remember for the rest of their lives and the last thing I wanted to do was make that memory for them anything less than perfect. Marrying Travis and Leah really went well, though, and they were so sweet. Having Becca by my side for it was really a calming influence. Even more so than the singing Elvis minister that came in later on and gave me some pointers on my marrying skills. Becca and I married a bunch of really excited couples that day, and it really is something that I will remember forever.”

Ben obviously took his job marrying people VERY seriously, but I am not seeing any clear language suggesting he had any romantic feelings for Becca at all. As far as their time at the Neon Museum he said,

“I had a lot of questions about her past experience and why she went so far without really being ready to get engaged. I respect her for going with her heart and not going into something as serious as marriage if she truly wasn’t ready for it. But I would be lying if I said there wasn’t a fear of her doing the same thing to me. And I knew I was going to be holding myself back from fully opening up and allowing myself to fall for her until I knew what was behind that experience that she’d had with Chris. I also have a tremendous amount of respect for her for tackling a subject as sometimes awkward as sex and religion with such ease and sincerity.”

Remember Becca could not return feelings for Chris Soules and would have won if she had. So Ben is understandably concerned.

Clearly Ben and Becca share a faith in Jesus and a reverence for virginity, but I think this is a cop out and a nice way of Ben saying he “just was not that in to” her.

Becca Tilley, 33, has come out with girlfriend singer Hayley Kiyoko