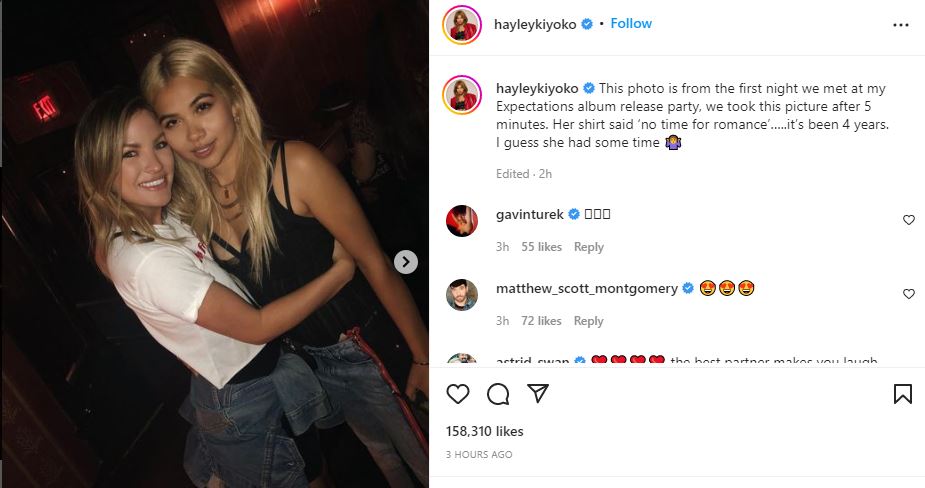 In very exciting Bachelor Nation news, it appears as though former Bachelor winner, 33-year-old Becca Tilley, has officially come out with girlfriend singer, 31-year-old Hayley Kiyoko. First I will say I had a hunch Becca may be in to the ladies after how indifferent she seemed with Chris Soules on The Bachelor and her virgin status.

There was just something about her that seemed uninterested in men. And I have to admit, I found the prospect of this stunning, exquisitely beautiful amazing lady being gay or bisexual very intriguing. So Becca appears to have finally found a very special romantic connection with someone and that someone is female!

This photo is from the first night we met at my Expectations album release party, we took this picture after 5 minutes. Her shirt said ‘no time for romance’…..it’s been 4 years.
I guess she had some time.

So I guess that means the two met in 2018–a year after she was dating another likely gay Bachelor Nation contestant Robert Graham..

This is a day after Kiyoko released a very lesbian “Bachelorette”-themed music video on Friday for her song “For the Girls” starring Tilley.

The video pokes fun at the ABC hit show as it depicts Kiyoko as the lead welcoming limos full of contestants and holding a rose ceremony.

Just when it looks like the first night is over a car honks and Tilley emerges in a one-shoulder gold sequin gown.

The video ends with Tilley and Kiyoko locking eyes and smiling at each other.

And on Thursday night at the video’s launch party a fan, posted on TikTok a video of the 2 kissing.

Hopefully we will get a Hulu series detailing how these two amazing ladies found love with each other and Becca’s journey coming to discover her sexual preference for women. Becca did grow up in a very Christian Conservative house and likely felt some pressure to find a conventional relationship.