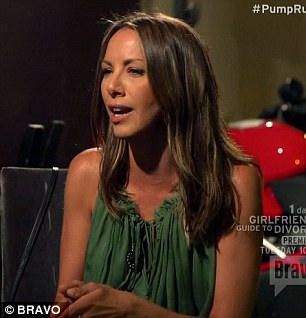 Just when we think we have learned everything about the cast-members of Vanderpump Rules more salacious dirt surfaces. Seriously, how did Lisa Vanderpump get so lucky having this crew of characters with their seemingly never-ending layers of shamelessness and secrets already working for her when the show began?

So 32-year-old Kristen Doute is a lot of things, but she is certainly not chaste.

Most recently she started dating a guy named Kevin who is good friends with 36-year-old kleptomaniac Jax Taylor (should have been the first clue) and lives in Austin, Texas. Allegedly Kevin has a girlfriend, but to be fair we can’t really accuse Kristen of knowing this fact.

Kevin supposedly told Jax’ new girlfriend Brittany that he has a girlfriend. So when Kristen’s ex Tom Sandoval learns this he claims “when me and Kristen started hooking up she had a boyfriend the entire time” …… “by the 4th time we had sex she was like I have a boyfriend.”

Tom then goes on to say, “if you want to know a secret all you have to do is give Kristen a compliment and those panties drop.”

In fact on Watch What Happens Live, Sandoval claimed,

“Look, the instance of [Jax and Kristen] hooking up was not the first instance of Kristen’s infidelity.”

We know she cheated on Tom with his close friend Jax Taylor twice, and with James Kennedy, but it sounds like there are some other men out there who have yet to emerge. So stay tuned on that.

So anyhow cut to present time, she meets a guy via Jax the guy she cheated on Tom with. But Kristen is now trying to get rid of Kevin because he has fallen head over heels in love with her after just a few days and is now squatting at her apartment. Kristen sends Kevin to get breakfast while she is hanging out with Stassi Schroeder telling her…” I liked him until he became a stage 5 clinger.”

Later at dinner Jax and girlfriend/Hooter’s waitress Brittany Cartwright confront Kevin about having a girlfriend in Austin.

Kevin concedes he has been “rekindling” things with her.

Kristen laments about how she can never meet a decent guy that will be faithful to her!

Then she reminds us that she is 5′-9″ which I guess makes her a super model? Not sure, but she is very proud of her slightly above average height.

Anyhoo, the episode is epic. Kristen’s evolution or should I say devolution is mesmerizing. She now has found a boyfriend that fits her requirements named Brian Carter, but I suspect this will take some interesting turns.