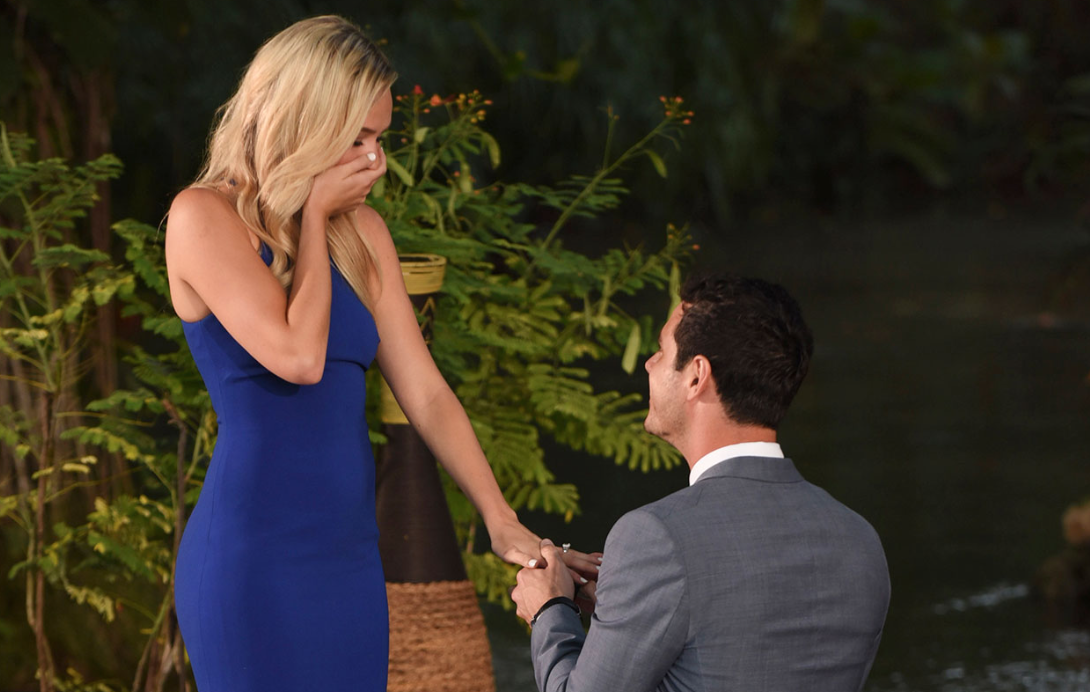 Ben was torn…very very torn. He was even torn when he met with Neil Lane to pick out an engagement ring.

“You’ve chosen someone?” Neil said…”you know who it is?” Ben exhales shaking his head no. Never has a Bachelor still been undecided while picking his Neil Lane ring!!

But thankfully examining the rings is just what Ben needs to decide upon a life partner. As soon as he sees the ring he knows it’s for Lauren.

Ben really proved what a professional Bachelor he was tonight. I mean good luck ABC ever finding a Bachelor as professional as Benjamin Edward Higgins of Warsaw, Indiana.

After deep and thorough introspection, Ben made a final decision and the proposal was ‘perfect’….just like Ben.

WHILE he is standing at the proposal altar, after an excrutiatingly painful break up with Jojo, he calls Lauren’s dad David and asks for her hand in marriage.

David Bushnell gives Ben the go ahead. Lauren arrives and starts delivering a diatribe to Ben about how in love she is with him.

“That night kissing you for the first time…that was the last first kiss that I ever wanted to have…coming in to this whole thing I didn’t know that love like this existed…..standing here now I get it.”

“You’re the person I want to spend my whole life with….you’re my person.”

Ben stops her and says,

“I came in to this honestly feeling unlovable…….this has been a journey full of goodbyes”

“Lauren I never want to say goodbye to you.”

“I want to wake up every morning and kiss you on the face. I want to go to bed at night and know that in the morning I’m going to wake up with the most beautiful woman I have ever laid eyes on.”

Higgins gets down on one knee and offering her a $100,000 three-carat, emerald-cut diamond set in platinum compliments of Neil Lane and ABC.

It is really the best proposal in Bachelor history.

Lauren is ecstatic and the two hug and kiss and talk about how lucky and happy they are.

Ben and Lauren had a very strong connection from the moment she stepped out of the limo on to the freshly hosed driveway.

In fact Ben made this adorable comment after his first meeting with Lauren.

“As the first limo pulled up into the driveway I quickly said a little prayer and thanked God for continuing to be with my on this constantly weird experience we call life. When that first door opened and Lauren B. got out, I knew she was there for me because wow! Just wow. She took my breath away but also just eased my nerves with how normal it was to meet her in such an abnormal circumstance. That helped a lot. ”

And on the ATFR show the two are still very much in love and plan to get married very “soon”!!!