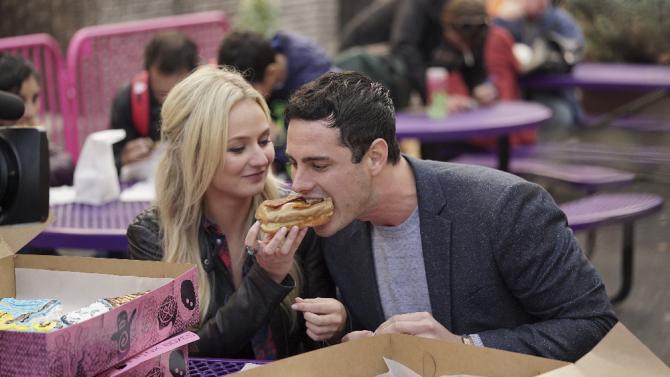 We just got done watching the most romantic finale/proposal in Bachelor history between 27-year-old Ben Higgins and 26-year-old Lauren Bushnell, and we watched interviews of the two afterwards which showed them very happily planning a future together.

But even for Perfect Bachelor Ben things do not appear so “perfect” behind the scenes. And it looks like these two could be headed for …. dare I say….. a breakup…sigh….

It looks like Ben’s fiancee is having a very tough time getting over seeing the season play out and seeing Ben be so torn in the end about his decision to dump Jojo Fletcher.

Lauren is allegedly “traumatized” after watching the season finale causing the couple to experience “extreme tension”.

Bushnell recently claimed that she would be moving to Denver in a few weeks to be with Ben, but now she is not feeling certain about their relationship.

A source at Life & Style claims,

“Lauren tries not to think about it,” ….. “But she’s traumatized that Ben told another girl he loved her.”

“Everyone around them can feel the awkwardness,” the source continues. “It’s unclear if they will last. Things between them are getting worse.”

“Ben values his ex’s opinion on things,” another source told Life and Style. “After breaking up, they would catch up here and there, but they got closer in the past year. Even when Ben got engaged to Lauren, that didn’t stop them from talking.”

Oh no! This is the same ex girlfriend that sounded a lot like she wanted Ben back in interviews. So this is truly an epically awkward situation. I suspect if the two do break up there’s a very good chance Ben could get back together with his ex since he really was not over her when he went on Kaitlyn’s season in the first place!