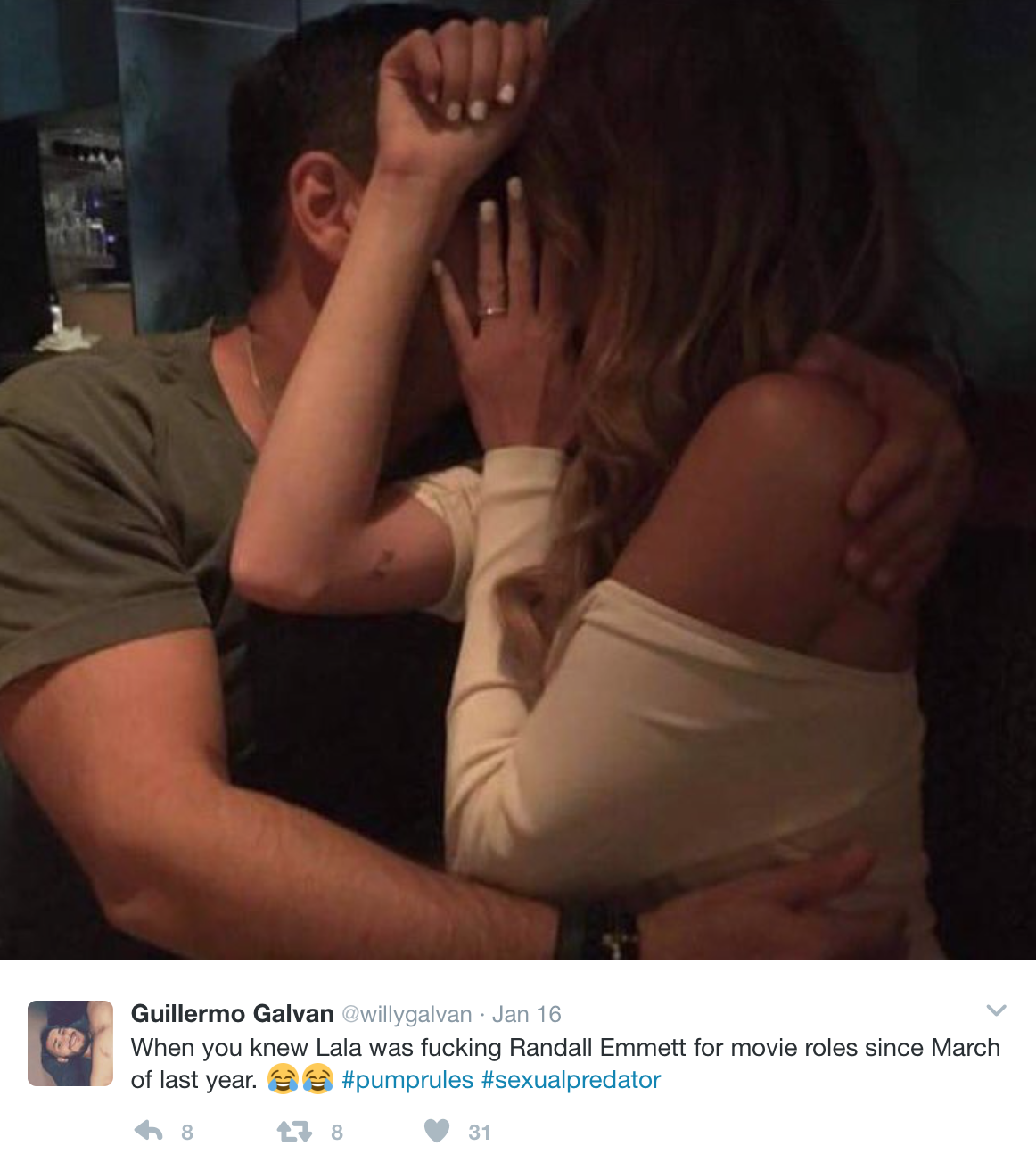 UPDATE: 12/26/2016: On episode 6 of season 5 Stassi mentions that Lala Kent has ‘decoy boyfriends’! Yes! This is what I proposed in the article below…that Hayes Pullard, the football player was being used as a decoy to cover the married man boyfriend situation.

Lala Kent’s mystery boyfriend has become a main storyline on season 5 of Vanderpump Rules. On episode 5 Lala laments about how said boyfriend has just broken up with her to friend James Kennedy as a result of all of the drama swirling around their relationship.

“And the 3rd story is that she dating a married man.”

Ok, so let’s break this down.

First, there is no way James does not know who Lala is dating. He is obviously trying to protect her so why does he say “technically” he doesn’t know who the guy is?

Why? Well because I think James is genuinely confused because I think there are actually two men. There is man 1, Sugar Daddy who is some married big wig in Hollywood and then there is man 2, also a millionaire, but single and living in Jacksonville, Florida.

Initially I thought the mystery man was just her ex Hayes Pullard, and she was keeping it secret since last season the infamous rim job was revealed and thanks to me the world knew that the Conservative, Christian Football Player was the recipient of said ‘job’ since we had previously revealed that ‘Hayes’ was ‘Hayes Pullard’ of the Jacksonville Jaguars. The revelation caused enormous strife in their relationship. So if they were back together surely Lala would keep it a secret.

I suspect her and Hayes are sort of together sort of seeing other people since he lives in Florida and Lala is trying to get her acting/modeling career started in LA. So they have that sort of arrangement.

Since Lala is technically available to date in Lala land she meets a Sugar Daddy, someone who has connections. Hayes has money, but no connections in the biz. He currently has a $2,280,000 contract with the Jaguars so plenty of sugar.

Although she is not “technically” cheating on Hayes, he may be furious if he knew she was seeing someone else. So perhaps this is one reason that she is vehemently denying the rumors about the married man.

Additionally, I think she is using the truth of her relationship with Hayes to try and squash the married man story. So long as she introduces her so-stars to one of these men they will think the other story isn’t true. Thus she offers to take Tom and Ariana to Florida to meet him.

The reason I do think there are definitely two men and it’s not just Hayes is because of how many of her co-stars have heard about the married man and sex tape from other sources.

I think Lala is likely in love with Hayes and when she talks about ‘being in love’ with her boyfriend she means Hayes not Sugar Daddy.

But I also think she continues to juggle both men. Sugar Daddy has likely promised to help her make her next move in Hollywood which is why she is so optimistic and ‘pumped’ about what is next for her. So stay tuned for more clues about boyfriend number two.

Lala recently got a role in a Nicholas Cage movie, Arsenal, and one of the producers on the film is 45-year-old Randall Emmett who is married to actress Ambyr Childers. Amber and Randall have a daughter together.

I suspect this cat is falling out of the bag in a major way. Stay tuned for updates!

1 thought on “Who is Lala Kent’s mystery boyfriend?”