Nick Viall actually does find love on the 2017 Bachelor 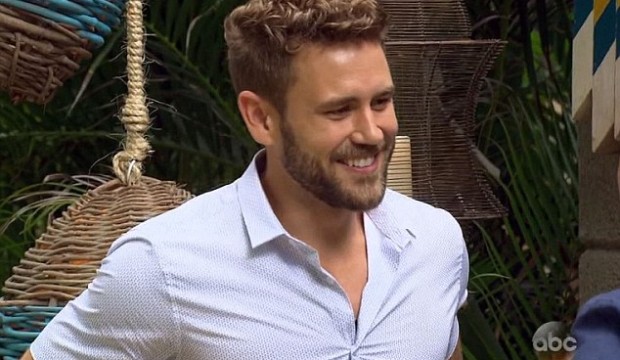 Alright, we are 3 weeks away from The Bachelor premiere and ABC has begun leaking some details about the 2017 season.

In a recent conference call 36-year-old Bachelor Nick Viall spoke to reporters about what to expect on the upcoming season which airs Jan. 2 on ABC.

Perhaps the most surprising nugget of all from Nick is that he claims he finds love. Why is that so shocking? Because we already know that 3 of the final 4 women tried to walk off the show because they felt Nick was there for the wrong reasons! I can’t imagine why.

“I can say I definitely found love,” he gushed. “I really won’t be able to get into much more detail about that other that. But… I certainly have no regrets.”

And in case you have not heard, a women that Nick hooked up with at Jade and Tanner’s wedding shows up on the premiere.

“I can’t give too much detail away, other than the fact that I didn’t know that someone from my past would show up,” he said. “Certainly when that happens, I think anyone would be shocked. As far as how it all plays out, or what I thought about it, I think that will be a very compelling part of the first episode.”

Certainly this will not help Nick’s reputation as a player!

In fact Nick says this about clearing up his bad rap,

“I certainly didn’t go into the evening with wanting to clear up any misconceptions, but at the same time… I was certainly aware of the fact that it is entirely possible that some of the women [on] night one could have a variety of opinions about me,” he explained.

“I’m someone who likes transparency, and I want to be in a relationship where people are upfront and open about any questions and concerns that they have, and so I always invited that, not only in night one, but throughout the season,” ….. “I certainly wanted to make myself available to the women to feel comfortable enough with me to ask me any questions they might have had or concerns that they have, you know, in getting to know me.”

Shockingly Nick claims his ex Andi Dorfman reached out to him.

I’m just shocked Andi would contact Nick at all after she slammed him in her tell-all book.

He goes on to say that he hasn’t “had any contact with Kaitlyn at all.”

“I think every experience in life that you have, good or bad, hopefully you can learn from it, and use that going forward to hopefully make better decisions,” Viall said. ”But I don’t think I’m that much of a different person between Bachelor in Paradise or The Bachelor, and for that matter, I don’t think I’m that much different of a person from the time I went on Andi’s season to Kaitlyn’s season.”

One woman that I don’t think we will see appear on Nick’s season is Jen Saviano who was devastated on the Paradise finale when Nick dumped her.

Alright, well understandably Nick can’t really give us any spoilers so that’s all we are going to get for now! Tune in January 2nd!

Nick Viall will be blindsided by an ex on night one