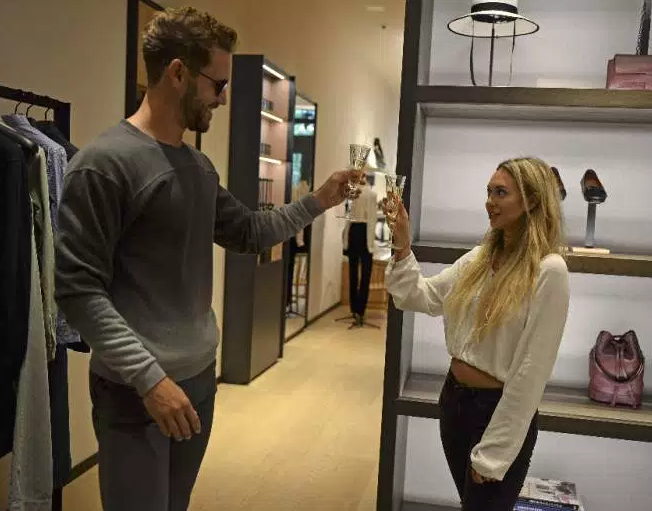 Say what you will about 24-year-old Bachelor contestant Corinne Olympios, but at the end of the day the Jewish Greek princess is adorable and very charming and last night the Epoxy-Flooring heiress was released from her hostage situation with ABC and allowed to roam free in her natural habitat—a Miami, Florida shopping mall, so Bachelor Nick Viall and America got a real taste of what dating Corinne may actually be like.

Yes when Nick arrives in her Hometown Corinne welcomes him with daddy’s credit card in hand and a high-end, albeit gaudy shopping spree.

We quickly realize this IS what Corinne does …. and does well…a little too well. She knows all the shopkeepers by name. They come out bringing her glasses of champagne as she tries on overpriced, ostentatious clothing. Then we watch Corinne feverishly picking clothing items out for Nick–of course yet another pair of skinny jeans and deep V-neck T-shirts. In am matter of minutes she racks up a $3,423.87 bill and casually tells cameras this is just another day in the life.

Until this episode I saw Corinne as — well, not a contender for Nick–she didn’t have a chance in hell, but a contender for some handsome young man somewhere who would find all of her idiosyncrasies charming, but last night we saw the fatal flaw and it was epic. The girl with the “platinum vagine” would never have enough.

Corinne’s wealthy, gregarious dad, James Olympios is well aware of his daughters spending habits and asks his daughter what she will do if Nick can not afford her that lifestyle of $3000 shopping sprees, full-time nannies and expensive Vajazzling and she blows it off claiming it doesn’t matter, but let’s be honest of course it does. Her dad asks Nick if he thinks he can support Corinne and he seems a bit hesitant, but just continues to reiterate how much he “respects” her aka I didn’t have sex with your daughter when she showed up to my hotel room in the middle of the night and tried to seduce me.

ABC leaves us on a serious cliff hanger about who gets the boot and goes to Fantasy Suites, but I think its safe to say Corinne is toast and sealed the deal with the shopping spree. Here’s the thing, guys will put up with a lot for a hot girl, but endless shopping sprees become really old really fast. I predict Corinne will soon find herself a wealthy, much older sugar daddy–which is really much more her speed anyway.

But I also can not imagine that ABC is going to let this golden goose go so easily. I’m sure they are sending her and her and her “platinum vagine” to Bachelor in Paradise this summer!!