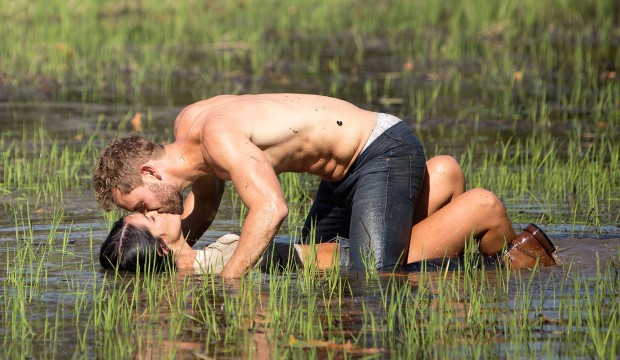 Well I think last night we saw why Nick Viall was chosen as The Bachelor as he navigated some seriously intense and uncomfortable Hometown-family situations with the greatest of ease. So with no further ado lets go over the top 8 situations of the night….

Episode 8 starts off in Bimini with the ladies sitting around in ripped jean shorts and t-shirts. Nick returns from his heart-breaking date with Kristina Schulman, he mumbles a few words and then starts passing out roses from the sofa. Seriously no one even got up from the sofa to receive their rose!

SITUATION 7: Raven Gates, despite her very sweet southern charm the girl can pull of a pretty good prank. When Nick arrives to her Hometown of Hoxie, Arkansas she tells Nick it’s a custom to climb random grain silos and “share secrets and have meaningful conversations”. As soon as the couple embarks on the adventure, a police car rolls up with lights and sirens a-blazing and a very serious police officer gets out and grills the two about what they are doing. Nick seems genuinely worried. I know I was! So the cop eventually says “this girl’s been giving me trouble my whole life”…then reveals that he is her brother Weston!!! Awwww! That was brilliant.

Unfortunately this date also reminds Nick of what life would look like in Hoxie, Arkansas.

SITUATION 6: Gratuitous shirtless Nick. So guess what? In case you have not been following Nick on social media, he has been working on his body and is very proud of it. The Hoxie date is the perfect setting for Nick throw off his deep V and show off his super toned, wet and freshly oiled physique while he and Raven make out in a swamp.

SITUATION 5: Rachel Lindsay attends a Texas Baptist mega church. Judging by all of the state of the art accoutrements all over the church, the Dallas parish has a ton of money and virtually no one in the audience. Hmmmmm, Concord Church of Dallas, I’m keeping an eye on you.

SITUATION 4: Rachel’s family is seriously intense. Unfortunately Rachel’s dad Sam A Lindsay is MIA due to work obligations, but her sisters Heather and Constance and mother Kathy are available to give Nick a deposition. Pretty predictably the conversation was about being in a bi-racial relationship, but guess what? I couldn’t muster the energy to care because ABC already spoiled this one by announcing that Rachel Lindsay would lead the 2017 season of The Bachelorette so why should I care about whether Rachel’s family approves of Nick? Thanks a lot ABC!

SITUATION 3: Corinne Olympios not surprisingly has a serious shopping addiction. Now we know why Nick gave Corinne a Hometown date despite never even giving her a 1 on 1 date.

Nick made off with over a $1,000 in deep V’s and skinny jeans compliments of daddy’s credit card. SITUATION 2: Vanessa Grimaldi has apparently never seen this show. On Vanessa’s Hometown date in Montreal, Canada, she is stunned that Nick asked the permission of the other parents to propose. Of course has the lead of the show in 21 seasons of The Bachelor ever not asked all the remaining contestants’ parents permission to propose? She must realize that there is a legal agreement, a very serious contract that Nick agrees to in order to keep the audience in suspense, thus tricking the other sets of parents is part of the deal! Does The Bachelor not air in Canada?

Anyhow, long story short, Vanessa is furious when her father tells her Nick is dating 3 other women and asked the other parents for their daughters hand in marriage as well.

SITUATION 1: Andi Dorfman returns!!! Wow! well I guess Andi Dorfman must have dropped her restraining order against Nick Viall from her season of The Bachelorette, because she knocks on Nick’s door to have a chat with him before he makes his final decision. Nick is stunned to say the least.

Here’s the thing. I think Nick was seriously in love with Andi…like crazy obsessed with the Atlanta attorney! Remember how he stalked her after the finale with the infamous letter? I don’t think he was in love with Kaitlyn Bristowe. I think the confrontation with Andi could be major because I think it’s possible that Nick STILL has feelings for Andi and sees her as the one that got away. To me, this is the big sitch to watch in the weeks to come!