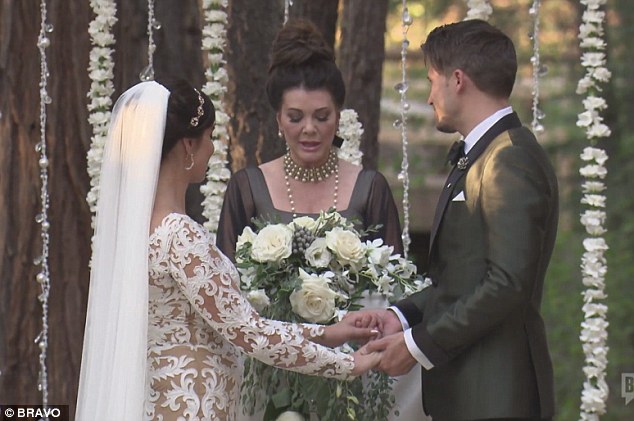 The wedding of Vanderpump Rules stars Tom Schwartz and Katie Maloney is fast approaching on the show although in real life they are already married.

Yes, Tom, 34 finally proposed to Katie, 30 on the last season of VP Rules after years of therapy, dragging his feet, and coercion by Producer Lisa Vanderpump. The couple was married this summer at the Twenty Mile House, just outside of Lake Tahoe, California by none other than minister extraordinaire Lisa Vanderpump. In the audience were their family, close friends, and costars: Stassi Schroeder, Kristen Doute, Tom Sandoval and Ariana Madix, Jax Taylor and Brittany Cartwright, Scheana and Mike Shay, and Peter Madrigal.

So will the marriage of Katie Maloney and Tom Schwartz last?

Personally, I am having a hard time thinking it will — for many reasons: 1: Tom is gay, 2: Tom is not that in to Katie and has oscillated between feelings of lukewarm fondness and loathing for years, 3: Lisa Vanderpump orchestrated this so she would have season 5 storyline — no way this would have happened without LVP putting pressure on Schwartzy behind the scenes. 4: Tom was too terrified to end the relationship. 5: Tom wanted to be the star of the show and this was his one chance. And 6: Tom’s own family was not even planning to attend his wedding!

How’s that for a detailed explanation of my pessimism? But I am certainly not alone. Virtually all of Tom’s castmates have expressed serious doubt that this relationship has any chance, including pulpiteer Lisa Vanderpump.

So NOW the couple is back to fighting over the alleged hookup that occurred in Las Vegas a few years ago between Schwartz and Tiffany Matthews best friend– Schwartz was in Vegas with Jax Taylor who at the time was dating Tiffany. Schwartz and Katie were in a fight and Tom hooked up with her friend.

So Tom eventually confesses to the hookup after Jax spills the beans, although Tom leaves the details conveniently ambiguous making Katie think they only kissed. But the evidence has been mounting for years that Tom actually had sex with ‘Vegas girl’.

Kristen Doute decides that Katie’s bridal shower, with the guys all dressed in drag mind you, is a good place to force Tom to clarify this detail as she believes it’s at the heart of the couples constant bickering. Tom is understandably furious at Doute and starts lashing out at her and her accomplice, boyfriend Brian Carter.

The episode ends with Schwartz saying “I’m not marrying that ####”.

Well we know the two finally do get married despite the bickering, but I will go on record to predict that divorce will be in the works by the end of next season. Luckily Tom had the good sense to ask Katie for a prenup to protect his $10,000 collection of sweat pants.

I know it sounds pessimistic but considering how dubious his own close friends are about this relationship, I think it’s doomed. Just wait till season 8 Reunion when Tom confesses that he was caught up in the fantasy, but was not invested in the reality.

Ironically, the two big storylines on the Vanderpump Rules season 5 finale are the wedding of Tom and Katie and the impending divorce of newlyweds Scheana and Mike Shay! How’s that for foreshadowing?

1 thought on “Will Katie Maloney and Tom Schwartz marriage last?”