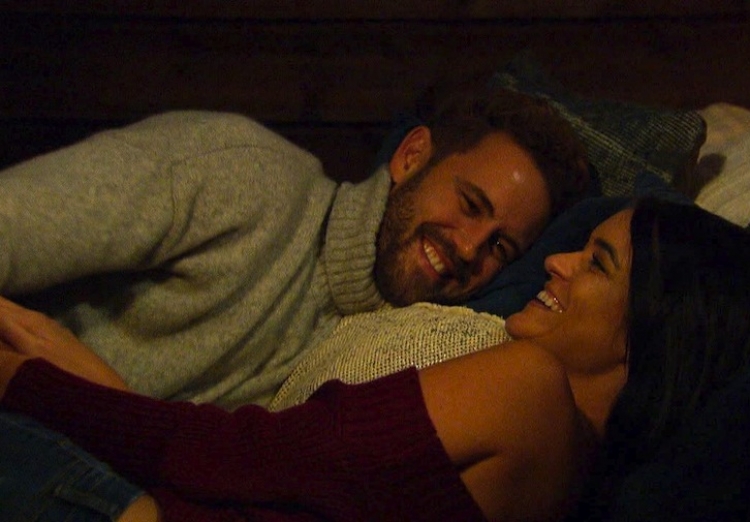 Over the years The Bachelor has given us some astounding 1 on 1 overshares–from Kacie B’s High School bout with bulimia to Ben Higgins battle with his born-again virginity. The show has become famous for the time-honored 1 on 1 supersensitive and unnecessary confession–a contestant either shares some deep painful secret, insecurity, or fantasy–something that really did not need to be shared with the lead let alone all of America.

And tonight sweet Christian Raven Gates, 25, won the award for greatest overshare in Bachelor history! Yes, the couple heads to Lapland, Finland to ‘seal the deal’ on their fledgling relationship. Raven, unlike some other girls (a-hem Vanessa Grimaldi) has seen the show. And she knows Fantasy Suites is synonymous with sex.

So she just matter-of-factly talks to Nick about how they will be having sexual intercourse for the first time later that night and decides after a few cocktails and a game of darts that it’s time to share some details about her last relationship—some very intimate details.

‘Every girl wants great things, fireworks, magic to happen but I have only had sex with one person and I’ve never had an orgasm before,’……yes, that’s right, hours before she and Nick are to consummate their love, Raven tells him she has only had sex with one man her whole life and that one man never gave her an orgasm—so……no pressure.

Nick gets a little hot under the collar and starts nervously grabbing his earlobes and pulling on his chunky turtleneck. Nick knows he will be “performing” tonight and is clearly both nervous and excited and now has a goal. Despite being dissed by so many of his ex lovers Nick is very confidant in his sex skills.

Now one caveat, Raven may be much more shrewd than we realize. After all her ex did cheat on her and how better to get back at him than disclosing his subpar sex skills to the entire world? Touché, Raven, Touché.