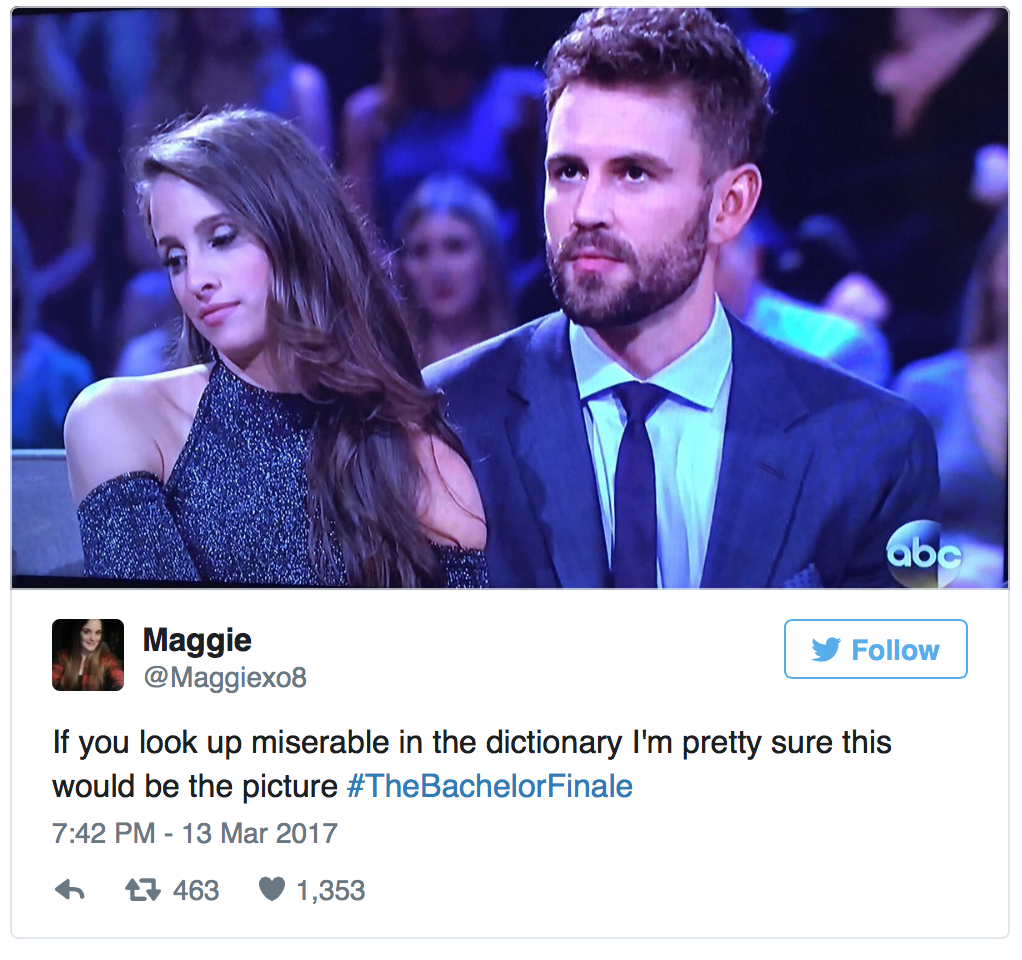 Tonight Nick Viall’s epic journey to find a life partner on national TV came to a dramatic end as the 36-year-old professional Bachelor contestant got down on one knee for the 3rd time and proposed to Vanessa Grimaldi…and she said yes.

Yes, despite the concerns of her family and her better judgement the Special Education Teacher from Montreal, Quebec decided to accept Nick’s proposal.

The episode begins in Finland where Nick’s parents Chris and Mary Viall, 2 of Nick’s sisters, Bella and……I think Maria Therese Viall, but Im not sure, and his bearded brother have journeyed to the North Pole to help Nick find a life partner. There they meet Vanessa for the first time.

There we see that Nick inherited his love of scarves from the women in his family and his ability to to cry at the drop of a pin from his father.

Somehow Vanessa manages to make Nick’s dad Christopher break into tears as after asking him if “love is enough”…..

Chris begins by claiming the question is a bit of a cliche and then breaks into uncontrollable sobbing as he recalls Nick’s prior heartbreaks.

In the end, the family appears cautious of Vanessa.

Then Vanessa and Nick meet up for the best date ever….. They go and meet Santa Claus!!! And Santa promises that he will deliver lasting love to the new couple. But maybe there’s a reason that Santa’s name is so close to “Satan”, because after that things start to snowball down hill pretty fast!

Nick suddenly seems a little distant—and cryptic. He claims essentially that he will be fine even if they don’t stay together. WHAAAT???!!! To me this was a serious hint and apparently Vanessa picked up on that too.

But Nick still met with ring-master extraordinaire Neil Lane…to chose the perfect ring for his Italian/Canadian/Jewish/Christian princess–a “classical-cut”. My good friend Sarah was furious as Nick was looking at rings and both Nick and Neil Lane referred to their favorite ring as “classical”.

Sarah texted me “it is classic. It’s not classical. Classical is my f**king music.”

Anyhow, Nick looks really burdened by the selection. As the episode goes on I feel more and more like Nick is going through the motions and he really does not wish to propose to either girl. Vanessa has reason to be concerned, but I also feel like she really should have watched the show before going on it!!! Her constant questioning is tiresome. Like look, it’s just not gonna work kids. You like each other, but not enough. No one likes the other enough to completely reinvent themselves, so lets just rip off this band-aide end it now.

Anyhow in the end Vanessa laments that she was torn about whether to ask a proposal or just walk away forever–yikes. So ultimately she decides to give it a shot. And we see why ABC chose Nick and continues to cast Nick on this show! His ability to conjure up tears and write marriage proposals is unparalleled.

Nick does get down on one knee with his 100,000 round cut “Classic” engagement ring and Vanessa excepts, but on the After the Final Rose episode things were ICY…to say the least!! It doesn’t take a body language expert to see this relationship is O-V-E-R!

Sure they may play it up for cameras for a while, but this relationship is over. This in addition to the story that Vanessa’s family thinks she has made a HUGE mistake. It will be interesting and telling to see if they show up on GMA and do media interviews tomorrow. If not, its officially done.

The other telling moment on ATFR was when runner-up Raven Gates came out and Chris Harrison asks her if she thinks Vanessa and Nick will marry and Raven seems very apprehensive–like she can’t even fake a “yes”. I suspect Raven has heard from Vanessa and knows more than she is letting on.

4 thoughts on “Are Nick Viall and Vanessa Grimaldi still together?”