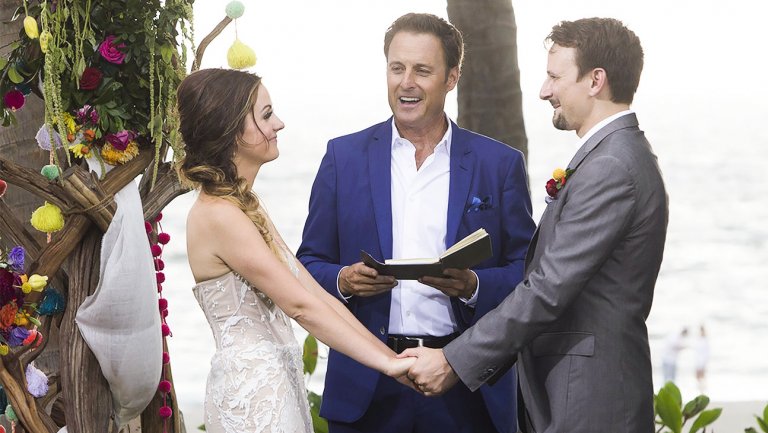 Tonight on the second night of the Bachelor in Paradise premiere, couple Carly Waddell and Evan Bass head back to paradise for their nuptials.

And apparently there is a bit of a ring conspiracy happening because when Evan proposed last September, he presented Carly with a light pink-colored pear-shaped 1.5 carat diamond atop a split band with round diamonds.

Yet tonight we see an entirely different ring as the couple was fitted for wedding bands. According to Neil Lane who spoke to PEOPLE,

“Carly absolutely loved the ring Evan proposed with, but she had always fantasized about a cushion-cut diamond” …… “When she saw this ring in the case she kept palpitating and she was overwhelmed. She kept looking at it. She was distracted and Evan was like, ‘Hey babe, what’s up?’ And she told him she always imagined a cushion-cut diamond. But she didn’t want him to feel hurt.”

And thankfully Bass was able to make the switch happen after talking to Lane.

“This never happened in all my years working with the show,” Lane shares. “I wanted to be part of the occasion. Carly jumped up and hugged me and Evan was beside himself. So he got down on his knees and re-proposed with that ring. It was so special. There was lots of tears. They were crying … my staff was crying!”

Waddell wrote on Instagram, “Thank you so much @neillanejewelry for my engagement ring and our wedding rings! We got to spend a few hours with Neil and his amazing team looking though the most stunning rings I’ve EVER seen! Can’t wait for y’all to watch us exchange these rings tonight.”

Interestingly I did not see Carly’s brother Zak Waddell in attendance so I am very curious if there is a situation there. Stay tuned…