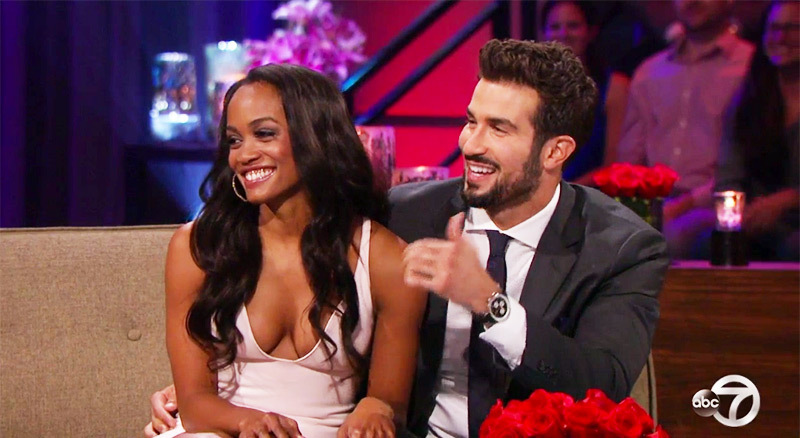 Rachel and Bryan clearly had chemistry from the moment they met. I have to admit I thought tonight might have been the least dramatic rose ceremony in Bachelorette history since it seemed Bryan’s game to lose from the start.

But tonight it became clear that Bryan was actually Rachel’s second choice and for that reason the finale seemed oddly bittersweet.

Peter Kraus finally offered Rachel a shimmer of hope tonight in Spain when he told her he was ‘in love with her’. Of course those words didn’t mean that Peter was ready to propose and Rachel had already drawn her line in the sand and was not going to settle for a boyfriend at the end of this.

So her and Bryan aka #2, shared some really lovely drama free dates in the Spanish countryside. And he presented Rachel with an adorable gift—a translation cheat sheet since he is Colombian. (Although in truth its just a regular Spanish dictionary wrapped in a homemade book cover with a hand made cheat sheet inserted.)

Then after 2 days of crying her fake eyelashes off and trying to convince Peter to change his mind and go visit Neil Lane, Rachel decided that Bryan had been her final choice all along.

She wakes up certain of her final pick, glues her eyelashes back on, and goes to see Bryan at the San Vicente de la Sonsierra Castle overlooking the River Ebro in La Rioja, Spain. “You are everything I could ever want in a woman, a wife, the mother of my children. I am completely head over heels, totally, absolutely in love with you,” Bryan says. “I just hope you feel the same.”

Rachel takes his hand and does admit that she has been “confused” this week concerned about their drama-free relationship–only vaguely alluding to her complete and total meltdown in Peter’s hotel room. She says that she has tried to “find cracks” in what strangely seems like the perfect situation.

“This love has been so mature,” she gushes (clearly a dig at Peter).

“It has tested me in ways that I couldn’t even imagine and I’ve always said that I would know that the person I was supposed to be with was the person I couldn’t picture my life without.” She tells Bryan that with him she sees her “forever” and her future. “I love you and I can’t imagine spending my life with someone else.”

So after 2 minutes of Rachel talking and not breaking up with him, Bryan realizes that he has won and can propose and present her with the custom 3 carat, $100,000 Neil Lane engagement ring.

Bryan gets down on one knee and asks Rachel to marry him.

And now the couple can emerge from 3 months of hiding and we can try and figure out if these two actually have a chance.