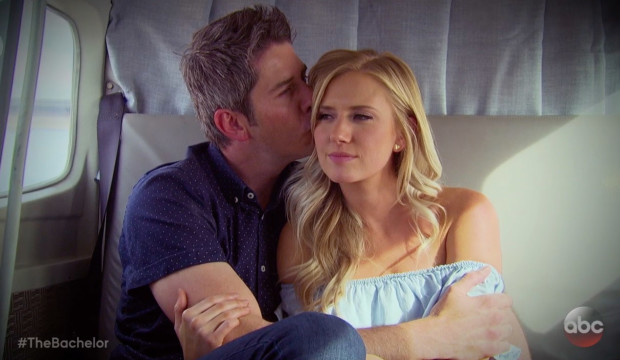 The Bachelor Nation major two-night event begins! After learning that 36-year-old Arie Luyendyk Jr. has a ‘needle dick’ on Women Tell All last night, we head to Fantasy Suites tonight with Kendall Long, Becca Kufrin, and Lauren Burnham. The three lucky ladies get to spend some intimate ‘off-camera’ time with Arie in Peru.

First up is Kendall. Kendall and Arie ride buggies in the sand dunes and talk about about how Kendall’s family didn’t seem totally sold on the 36-year-old race car driver. Kendall is questioning whether or not she is ready to make a lifetime commitment to a man she has just met.

”If Arie proposed to me today I’d probably say no.”

She wants to know if Arie really likes her for her or just sees her as a freakish novelty to entertain people at parties.

“I can’t see myself accepting a fantasy suite or going further if I don’t feel like I’m confident and ready for a proposal at the end of this [but] I don’t want it to end just because I’m not ready.”

And then Kendall accepts the Fantasy Suite date card.

Arie does tell Kendall,“I’m falling for you” which would have seemed like a bigger deal if he had not also told both Lauren and Becca “I love you”.

Lauren and Arie took a scenic and awkwardly silent tour of Peru by plane.

Lauren is having serious PTSD because her ex boyfriend, Chris Crane turned into a serious a-hole right after they got engaged in Virginia Beach, Virginia last year. In fact the broken engagement was so recent, I am wondering how she can handle being on the show at all.

“You’re so in your head right now,” Luyendyk tells her.

Once again, I wonder if anyone has seen this show. At lunch Lauren is freaking out because she suddenly realizes that she is not in a monogamous relationship with Arie and he could potentially fall in love with someone else.

Arie quells her fears by saying, “It scares the s— out of me that you would leave me.”

The two insecure lovers exchange the L word and head to Fantasy Suites.

Arie continues to pretend that the last time he was in love was with Bachelorette Emily Maynard saying, “I wanted these feelings again. I just didn’t know if I could feel them, but I did with you.”

Needless-to-say, Arie is forced to use their limited time together to reassure Lauren rather than getting to know her–aka she is getting a bit high maintenance. 27-year-old contestant Becca looks like a shoe win. Her and Arie seem blissfully in love. After a calm day at sea the two have dinner in a tent on the sand dunes, where insecure Arie talks about his fear of “choosing the wrong person at the end of this.”

“There’s a part of me that wants to end this now and propose here in the sand dunes,” Arie tells cameras.

But wait, plot twist! Becca’s ex boyfriend, Ross Jirgl, has decided after a full year of being broken up with Becca that she is the only one for him. He searches high and low for his lost lover and finally finds her on a reality show searching for a husband.

He laments about his long flight and 5 hour bus ride to get to the remote location, but says he would have swam across the ocean to get to ‘his girl’.

Now I know this is crazy talk, but something tells me producers had a hand in getting Ross there–either that or he has a GPS tracking device on Becca so for her sake, I hope it’s the former.

Ross shows up and knocks on Arie’s door to tell him he has come thousands of miles to claim his personal property.

“As long as I’ve thought about her, that’s my proposal to give her. She’s the love of my life, I want to marry her,” Ross tells frazzled Arie, explaining that he “came here to get her.”

Arie seems Ok at first, but later reveals that he is pissed.

Next the sports performance coach knocks on Becca’s door. He expects a warm welcome…for some reason. Instead Becca is cold and angry that Ross is pulling this chicanery saying she ‘knew he was going to do this’ and complaining that he wants everything to be like The Notebook. The two dated for 7 years and something tells me there was a lot of on and off.

At any rate she turns Ross’ amazing offer down and he leaves humiliated and angry, but on the bright side, he did get a free trip to Peru and ladies on Twitter were going crazy for the handsome football star.

At the rose ceremony Arie decides to let Kendall go and Kendall sobs in the exit limo worried that she expressed too many reservations, but seriously I think when she sees the finale she will count her blessings that she escaped this train-wreck and just in time for Bachelor in Paradise!

Host Chris Harrison promises the epic 3-hour finale will be “unlike anything that’s ever happened” before on the show.