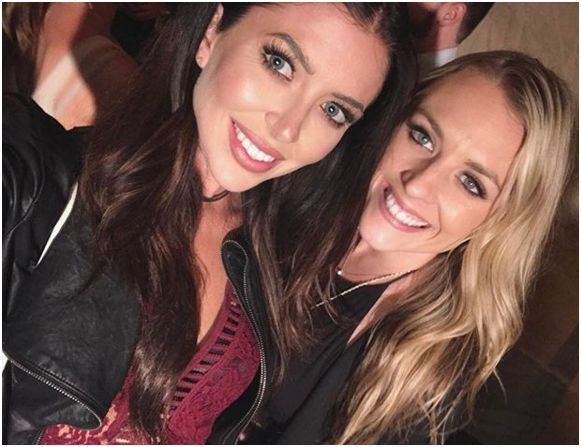 Last Thursday night former Westpoint grad Luke Pell, 32 got some sexy hot-tub time with 26-year-old Stassi Yaramchuk of Malmö, Sweden on the Bachelor Winter Games. Luke appeared to be somewhat interested in Stassi, but it sounds like things are not exactly as they appear and Luke is hiding a secret girlfriend back home.

Remember, he was originally cast as The Bachelor before of Nick Viall, but was swiftly replaced when producers got wind of the fact that he was not doing it for ‘the right reasons’, and one of the ‘reasons’ producers had to make the last minute switch-a-roo had to do with the fact that he was hiding a secret girlfriend.

That girlfriend was Holly Allen, 30, of Lander, Wyoming who he was with in Vegas a few months ago along with fellow Lotharios, James Taylor, and Jef Holm. The two have been dating since then.

Holly was Miss Wyoming, USA in 2012 and presently works as a wine guide at the Malibu Wine Safari. Prior to that she helped her family operate a guest ranch in the Wind River Mountains in Wyoming. So she is a country girl through and through and is perfect for the country crooner.

Thus, the idea that Luke is going to throw all of that away for a long distance relationship with Stassi is ridic,

Make no mistake, Luke is in it for money and fame.

Ok, now to a conspiracy theory: I think that Holly was actually cast as a contestant on Luke’s season and Luke and her would pretend they had never met. Holly would of course win in the end.

One reason I think she had been cast as a contestant is because one of Rachel Lindsay’s dates was to the Malibu winery where Holly worked thus producers had been there and scouted out the scene and may well have recruited the stunning brunette at the time. And the show does reach out to organizations like Miss USA looking for pretty, single girls. Or Holly contacted them through various connections.

Either way, I think that producers’ public digs at Luke when they gave him the boot meant that he had betrayed them in a pretty serious way. Of course inviting him to participate on a show like Winter Games was a way to capitalize on his giant fan-base without allowing him to jeopardize the integrity of the show.

3 thoughts on “Is Luke Pell hiding a secret girlfriend back home?”