Arie Luyendyk Jr. proposes to Becca Kufrin and then changes his mind 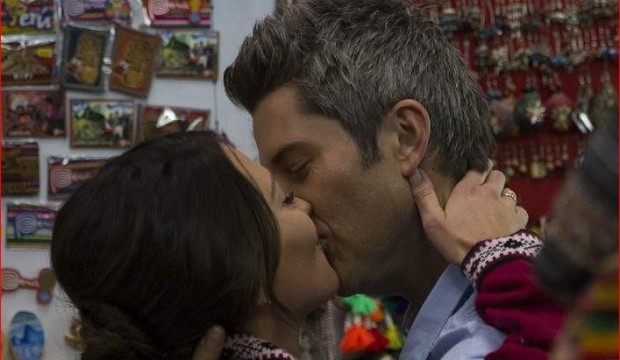 Arie Luyendyk Jr. proposes to Becca Kufrin and then changes his mind

Arie Luyendyk Jr. may have surpassed Juan Pablo Galvais tonight as the worst Bachelor in Bachelor history after he proclaimed his undying love and affection for Becca Kufrin in Machu Pichu, Peru, and then off-camera had buyers remorse and chose runner-up Lauren Burnham.

So what happened? First the official finale:

The two final ladies met Arie’s brusque, Dutch family — his mom, dad, sister and the twin brothers, and they seem shockingly indifferent to the whole process especially Arie Luyendyk Sr. who tells Becca ‘well I think either girl would be just fine’.

The funny part about tonight’s episode is ABC was not even trying to hide the shocking ending. It looked like instead their strategy was just to concede the ending from the getgo and spend the Live show doing damage control to try and convince us that this ending wasn’t that bad.

The show keeps cutting to the Live audience and some of Arie’s former amazing ladies who sit in total disgust at the idea that Arie changed his mind after his allotted 9-weeks.

Becca’s good friend, 27-year-old Caroline Lunny, tells Chris: “What he did is unforgivable,” ….. “There’s no other way around it.”

“It’’s hard to watch all of this and to watch him kind of toy with both girls. I think what he did to both of them is just not fair. I care about these girls.”

But they also bring back Jason Mesnick and Ben Higgins.

Mesnick reminds us that the infamous ‘Mesnick’ ultimately resulted in a happy ending and Arie has to follow his heart. And Ben reminds us that it’s Ok to tell two women that you love them right before you propose to one.

Chris Harrison is trying to reassure Bachelor Nation that everything is going to be Ok knowing that Arie is going to have hell to pay since Bach Nash does not like indecisiveness especially after the Bachelor proposes to someone.

Anyhow, after consulting with his family Arie decides that Becca is the right choice simply because Lauren needs too much reassurance, but suddenly Lauren feels confident in her 9 week non-exclusive relationship with Arie and tells him she has no concerns and is in love with him. Arie suddenly appears to change his mind and says he is head over heels in love with Lauren.

“This entire process Arie keeps saying that I seem so confident, but the fact is I internally am freaking out because there’s one other girl here still and she is a huge threat to me,” she Becca laments about 25-year-old Lauren.

Arie does tell 27-year-old Becca that he is conflicted and for the first time she realizes it might not be her. But Becca is not giving up and she tells Arie she loves him and presents him with the infamous ‘I love Arie’ scrapbook of their 9-week journey that she made during her hotel hostage situation.

If we didn’t already know how this ends I would be genuinely confused about who Arie is going to choose. But alas, we all know how this train wreck ends.

On to the big engagement day:

Lauren comes down to the proposal stage and tearfully tells Arie that she is in love with him. Luyendyk Jr. stands there clearly holding back tears and cuts her off saying, “there’s something that was holding me back and I can’t go through with it. It’s not anything I can explain other than that, I gave it everything I had to see if it could work.”

He also tells her that he made his decision this morning.

“I feel a little bit like a monster right now,” he said, as Lauren drove away.

On to Becca who is ready to start a ‘journey with Arie’.

Becca delivers a heartfelt diatribe about how ‘easy’ everything has been with Arie (little does she know what’s coming).

She tells him “I don’t want to ever stop loving you and I’m ready to do this thing with you”.

He quickly gets down on one knee with his Neil Lane engagement ring and proposes saying, ”I choose you today and I choose you everyday.”

But things are not over. Suddenly ‘every day’ turns into a week or two and Arie has a change of heart.

Spoiler alert, Arie contacted Lauren a few weeks after the show wrapped and went to her home to reveal his change of heart —more on that tomorrow!

After the Final Rose gets ugly as Arie Luyendyk Jr. confronts Becca Kufrin