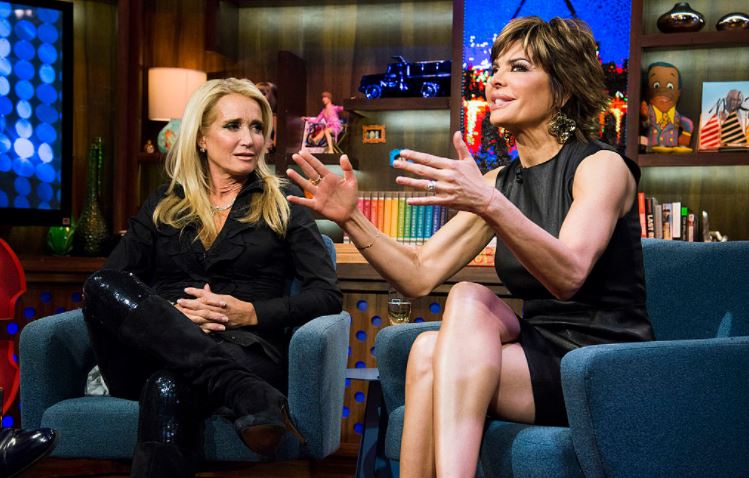 The scandal that just won’t die on The Real Housewives of Beverly Hills is the bizarre beef between Kim Richards and Harry Hamlin. Granted both of them barely appear on the show, but there is a secret….a deep-seated secret that has yet to be released.

And the secret is so explosive, in 2015, it prompted Lisa Rinna to violently break a wine glass in Amsterdam and to threaten Kim. “Don’t you EVER come after my husband” Rinna screamed across the table.

It prompted Harry to threaten Kyle Richards saying “what are we going to do about your sister?” (as in to shut her up).

And NOW, 6 years later, the big secret is set to be revealed.

Kim has been around Hollywood a very long time. She has partied with big A-listers of her generation. And now the former child-star and recovering alcoholic has a memoir coming out called, The Whole Truth: The Reality of It All.

Publisher Harper Collins teases that the book will reveal “the effects that [The Real Housewives of Beverly Hills] had on her relapses,” and will finally will finally reveal the big secret about Harry.

Life & Style magazine spoke to a few insiders about the situation: “At times, the show seemed to make her addictions worse,” …. “Everyone from the show is afraid of what Kim will reveal because, as it turns out, she has something on all of them. The Housewives shaking in their heels.”

“Not even Andy Cohen” is off limits for Kim, the source explained. “Kim knows who really hates who, all the fake friendships among the ladies, who sucks up to Andy. The book could destroy some very close friendships.” The source says she is also going to dish on other former cast mates.

YIKES!!! I thought the bunny finally resolved things between her and Rinna. And I honestly never thought Kim would have the courage to out all of these people publicly.

This may be a lot of hype, so I will hold my breath until the book comes out, but Harry must be shaking in his boots. If our insider was right, there will be a bombshell released about Harry and actress Julianne Phillips about a serious sexual encounter the two had on the set of Allie & Me in the 90’s.

Her tumultuous relationship with sisters Kyle Umansky and Kathy Hilton will also be discussed in the book. Kim’s courage may have more to do with the fact that she appears to be broke.

She currently lives in a lackluster apartment complex in Encino because she owes $90k in taxes.

Incidentally, her ex husband and father of 2 of her children is billionaire Gregg Davis so it’s hard to get why Kim would ever be “broke”, but I digress. Evidently Kyle and Mauricio Umansky are paying her rent at the moment. Perhaps their benevolent gesture is in reality hush money. I guess we will know more when the salacious book comes out.