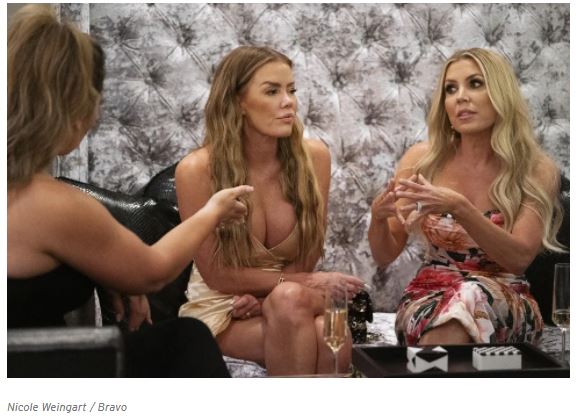 I just watched the premiere of Real Housewives of Orange County and surprisingly it did not disappoint. First we get introduced to 3 sexy young newbies — one of which was brought on to the show by alumni Heather Dubrow.

Nicole James is the stunning 42-year-old Pam Andersen look alike, but she also happens to be a former patient of Dr. Terry Dubrow and her children were classmates with Shannon Beador’s kids. So right out of the gate the stage is set for a situation to emerge.

Beador, 57, starts things off by getting some cocktails with Junior-year co-stars Gina Kirschenheiter and Emily Simpson and confesses to them that she knows something major about Nicole.

Off camera she confides in them that Nicole sued Heather’s famous plastic surgeon husband — ‘Botched’ star, Dr. Dubrow. Shannon thought she could share this with the ladies privately. Evidently she has not seen the show.

Next up Shannon takes Gina to meet Heather Dubrow for the first time and Shannon panics as Gina insists she tell Heather the big secret.

Shannon says in confessional: “I made a pact with Gina and Emily the night before saying if, for some reason, this is the same person we keep our mouths closed.”

Later the ladies head to Heather’s new $21 million home for a party.

Gina explains in confessional: “The right thing to do is to tell Heather cause I don’t think I’m capable of pretending that this is okay.” Wasn’t it Terry’s job to tell Heather he was sued by this woman?

The episode ends with clips from next week showing Heather flipping out at the girls and the cameras.

My first question is, how is it that Heather was not aware of the alleged lawsuit?—seems strange to keep that sort of secret from his wife. Secondly, given how lauded Terry is in the world of plastic surgery, what the hell happened? Could it be that Dubrow is just as bad as the plastic surgeons he chastises on his show?

According to RadarOnline Nicole bashed Terry’s skills as a plastic surgeon claiming he gave her a botched boob job.

“Nicole was brought on by Heather but only filmed for a few weeks.”

“A big storyline that will play out (but is also the reason why she’s no longer on the show full time) is that Nicole was unhappy with the breast augmentation Terry performed on her many years ago.”

They continued: “It started circling around through the group, and Heather found out because Shannon was telling everyone but her.”

For this reason Nicole does not get to stay on as a leading lady and gets demoted.

Evidently Nicole stopped shooting several weeks before production wrapped in October. So I guess we won’t get to know Nicole!

I want to know if producers knew about this when they brought her on? And who exactly made the call to have Nicole demoted? Normally I would say ‘of course producers knew’, but in this case, this storyline doesn’t really benefit Bravo since they make so much money on Botched and Terry’s seemingly impeccable reputation.

I can’t imagine Heather knew or she would have never agreed to do the show. Alas, the end result is that viewers got an authentic ‘moment’ that happened as a result of an amazing set of circumstances and some shocking oversight by Bravo.

If true, the suit was undoubtedly settled and both sides would have signed NDAs and would not be allowed to talk publicly about it which puts them both in an impossible position being unable to defend their side on air or anywhere else. So not a shock Bravo nipped this bombshell in the bud.

There were rumors that Kelly Dodd was bringing up dirt about Terry and that’s why Heather refuses to film with her and one reason Kelly was let go.