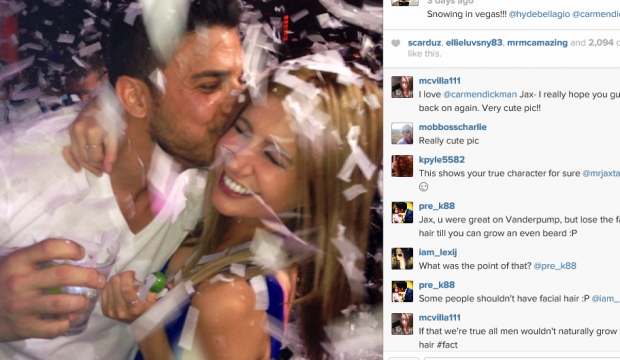 On the premiere of Vanderpump Rules season 3 Jax Taylor claims that he has gotten himself into a bit of a ‘situation’—2 girls. He also claims that he ‘doesn’t know how he gets into these situations’ a-hem and that the 2 girls ‘both know about each other’ and that there is ‘no lying or deceiving’!

Oh boy! Well that is simply not true. The two girls do not know about each other. In fact Tiffany from Vegas was shocked when she learned that Jax was dating Carmen.

So I know you are going to need a flow chart to keep up with the antics of Mr Jax.

January 24th, 2014: Jax calls Tiffany to break up with her but does not mention Carmen.

March 22nd, 2014: Jax breaks up with Carmen and gets back together with Tiffany after a trip to Las Vegas

April 2014: Jax breaks up with Tiffany and gets back together with Carmen.

May 2014: Jax breaks up with Carmen, gets back with Tiffany.

June 26th: Jax meets with Vail Bloom after texting her that he was single and had broken up with Tiffany (but he and Tiffany are still together)

Jax met Tiffany first in the summer of 2013 while Vanderpump Rules season 2 was still being filmed. Tiffany “planned a party for one of his friends at the Hyde Bellagio over the summer and that is how it all started. They continued to chit chat on Twitter and because Stassi started dating someone new Jax had a hard time staying in LA. He started going to Vegas more and more to get away. That’s how Tiffany and him began spending more time together ,” according to a show insider.

He made his relationship with Tiffany official on Facebook on July 23rd, (that is around the time the finale of season 2 was filmed and is why Stassi was questioning Jax about the “status update”.)

He met Carmen around the time that the second season reunion was filmed on January 10, 2014.

Looks like Tiffany found out about Carmen via social media because Jax started promoting his relationship with Carmen around January 11th. Jax told Tiffany that Carmen was a set-up via producers to replace Stassi, but he didn’t tell Carmen that!

So Jax and Tiffany get back together in March after one of many trips to Las Vegas for Jax. But in July Jax resumes his relationship with Carmen. Our insider said this:

As of right now November 4th 2014 8:00pm Jax is not seeing either girl but that could change in a minute. So we will stay on top of this sitch!

So there you go, a little background and a flow chart.

UPDATE: November 9th: It appears that Jax and Carmen are BACK together!