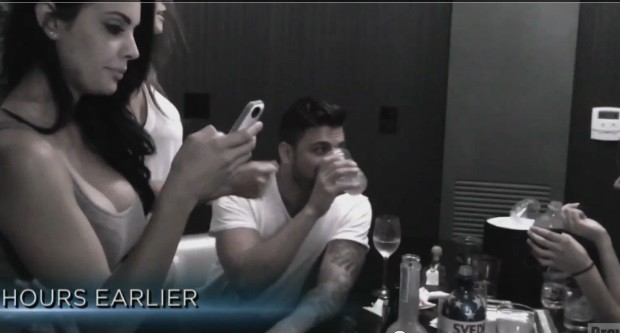 So tonight the cast of Vanderpump Rules takes crazy to a whole new level and Mr. Jax Taylor even out Jaxes himself. The boys head to San Diego for a ‘Boy’s Weekend’ and it sounds like girlfriend Tiffany Matthews was supposed to go with them but because she and Jax were fighting just prior to the trip it became an exclusively boys trip at the last minute. Tiffany Matthews is an Events manager at the Hyde Bellagio in Las Vegas so she hooked up the boys with a kickass suite at the Hard Rock hotel in San Diego, but after a full day of drinking Jax brought some girls up to the hotel room and allegedly “banged” one in the hotel’s bathroom.

When Jax wakes up he claims to have no recollection of what happened the night before. Tom Sandoval is especially mortified and outraged at how ‘disrespectful ‘ Jax was being to girlfriend Tiffany. Tom Schwartz insists on protecting his boyfriend Jax for some reason (He claims that it’s because Jax may have some dirt on him but I think its because Tom Schwartz is in love with Mr. Jax) and Peter is way too busy with the hair straightener to express an opinion.

But needless to say a big situation ensued.

So Jax meets with the two Toms after the trip and  suddenly recalls everything and claims that the girl grabbed his crotch on the dance floor because she wanted to see “how big it was”.

Jax claims the girl was throwing up in the hotel bathroom and he was ‘holding her hair’ but that did not align with all the sound affects that were coming out of the bathroom.

Jax does what Jax does best—completely denied that anything inappropriate occurred with the girl. Jax’ ability to lie or spin the truth is becoming legendary leading many to speculate that Jax may be a Sociopath.

He calls Tiffany after realizing that Tom Sandoval does not have his back and will definitely tell on him. He spins the story to sound like he was just helping a sick girl who was coming on to him, but Tiffany is not buying it and hangs up on him.

Why did Jax Taylor and Carmen Dickman break-up?