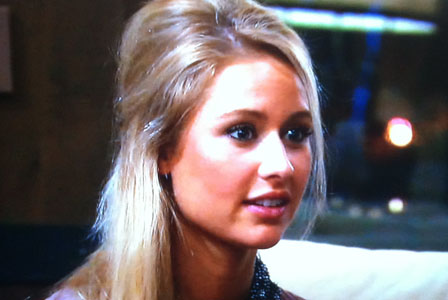 I went on record last week saying I thought it may not be Casey Shteamer with the boyfriend because of the extensive full frontal hug Chris Harrison gives her in the previews. I still contend that Chris does not dole out full frontal hugs to the ladies on the show, especially to a lady forced to leave because she pulled one over on producers with a boyfriend.

He always maintains a very professional distance from contestants — offering a gentle hand on shoulder at most. So I suspect that Casey S must have actually thrown herself INTO the hug with Chris.

The hug shot, coupled with the producers tweeting “its not what you think,” completely threw me off. So the counter-intelligence being launched by ABC (I suspect in response to the security leaks being published by Reality Steve) to convince us that the obvious was not the answer had me convinced it would be Courtney Robertson.

But, alas, it ended up being the obvious after all! It is, in fact, Casey S. with the boyfriend back home (or, ex-boyfriend that she’s still in love with.)

Her boyfriend’s name is Michael Patak and he runs a trading company called TopStepTrader in Chicago. Apparently she is still in love with him and, as Chris Harrison so eloquently outlined, “three different people in the United States turned her in.” More importantly, Chris Harrison is forced to go off script once again with iPad and manila envelope in hand and handle an uncomfortable situation with impeccable professionalism.

(I’m just wondering if the manila  envelope was an evidence file in case Casey denied it). And lets be honest, our favorite part of this show is when Chris Harrison gets awkwardly cute and nervous and has to go off the cuff and manage a difficult situation.

I mean, Chris managed to get her to admit to needing therapy within minutes of the confrontation! He really knows how to get the contestants to open up.

I love that Chris even did his due diligence by speaking to the ex-boyfriend personally prior to his confrontation with Casey. Then, he offers the hand-on-shoulder professional speech about how he is not judging Casey S. and understands her actions.

Another case of Chris Harrison exemplifying the healthy 3. He doesn’t lecture her or lash out at her for sneaking past producers and wasting their time. He simply takes the opportunity to help Casey develop and integrate into her healthy self. I think we have yet another Emmy-worthy Chris Harrison moment on our hands, folks.

In the meantime, producers don’t realize Courtney DID have a boyfriend just prior to doing the show just like Casey S. And this boyfriend has since emerged to confirm that suspicion…. with sex tape in hand.

His name is Cavan Clark and he was the subject of this recent story in Life and Style magazine.

“She was dating photographer Cavan Clark for months. Then one day she just stopped calling.” an insider said. “She literally vanished,” another friend says. “And they were so serious. Even talking marriage. He was about to propose.”

The insider goes on to say: “He saw her on TV and guess what? She filmed her promo in a dress Cavan had bought her while on a bicycle Cavan had bought. He hasn’t heard from her since.”

So even though the producers don’t know at this point on the show that Courtney is clearly in the same boat as Casey S., they have probably figured it out by now since Cavan Clark has emerged on the scene to expose the situation. So alas, we have two amazing ladies in the midst of break-ups doing the show but so far only one has been caught!