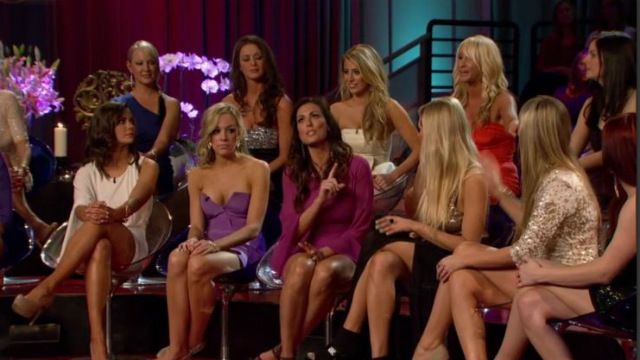 Wow. For the First Time in Bachelor History, one of the finalists, villain Courtney Robertson, made an appearance on the Women Tell All episode. We love a good Bachelor first! To read our thoughts on this week’s WTA episode, check out our recap post here.  It was a night filled with fashion and feisty feuds. And, above all, we saw Courtney Robertson cry; she shed at least one picturesque tear in an effort to apologize to the ladies for all of her poor behavior and catty comments. It was a doozy!

Now, let’s see what some of our favorite Bachelor characters and bloggers had to say:

From Jillian Harris: “I was nervous to watch “The Bachelor Vegas Reunion” part of the show- who wants to watch their ex sugarcoat the circumstances of your breakup on national TV? Eeeek! I guess it’s best to keep it simple, although it did strike a little nerve… oh well. Some of my twitter followers were asking me why I wasn’t there, and that’s because it was my cousin Samantha (link to diy headboard post)’s 21st birthday and I wouldn’t have missed it for the world. Family is more important.

The much-awaited Courtney segment was a nice little reminder that she actually is human. I’m not sure if she feels sorry for her actions or sorry for herself, but it was clear that Courtney was genuinely upset. I can’t imagine having that many girls coming at you like that. As they, say… Karma is a big, giant b*tch!”

Kacie questions her about her comment, “How’d that taste coming out of your mouth?” and Courtney even smiles when Kacie says it.  Maybe not the best thing to do when you’re apologizing.

She looks up a lot when she’s “crying.”  I don’t remember her doing this before when getting emotional on the show.

Emily asks her why they all should forgive and forget with Courtney when Courtney made it clear that she wasn’t the type of person that forgives and forgets when Emily tried to apologize.  I think Courtney’s brain almost implodes at this point.

From Chris Harrison: “Emily was one of the more interesting interviews I had that night. It was tough to get her back in that emotional space where she was on the show. She’s very much over Ben. She had many revelations while watching the show and it’s safe to say she’s learned a lot about herself and what she’s looking for in the future. Nikki was a little different. She was immediately taken back to that emotional space, and I could see the emotion in her eyes. She truly fell in love with Ben and was badly hurt when he said goodbye. That said, I was so impressed to see that she really turned this whole experience into a positive. She’s proved to herself that she can love again after her divorce and she’s ready to find that in her life. The biggest surprise of the night was learning that Kacie B. really didn’t realize her hometown date is what sunk her relationship with Ben. She knows this now, but at the time she really had no idea. This goes to show that the women really only know how their individual relationships are going. They have no perspective on how the other hometown dates went or how the other relationships are progressing compared to theirs.”

From Natalie Getz: “Normally I only poke fun at style and awkward moments. Not tonight. I’m so upset with how these girls treat not only each other, but Shawntel as well. I’m not defending Courtney, but I am irritated that so many of you out there are so blind to some of these ladies. Open your ears! They all say mean things about each other behind their backs and directly to their faces. Why does everyone slam Courtney when her comments were nowhere near half as rude as some of the things these ladies said on this episode?! They definitely showed more of Courtney’s digs on the others, but don’t sit there and be an idiot in denial that your favorite cast mate may also be a total snot. Normally at the Women Tell All, I see softer sides to the “villains” of the show, but this time it was quite the opposite. This time I saw even the sweetest of girls be complete brats. I am not going to be very nice in this blog.”

From Michael Stagliano: “Good news: after the WTA I got to hang out with 10 of the girls from this season: Erika, Jaclyn, Emily, Samantha, Kacie B, Kacie S, Monica, Jennifer, Jenna and Rachel.

First, I literally can’t say enough good things about these girls. They were LOADS of fun, sure they were a little wild, and crazy…most of which you don’t get to see on screen. But they were also incredible welcoming, warm, kind and so much fun to be around. I found out a few of them were from Chicago (where I grew up primarily) Erika, Rachel lived there. Jenna lives in NY and was a total sweetheart, very good at conversation, super mellow and easy to talk to. Samantha was all 6′s and 7′s, bouncing all over the place, like an attractive Cheri Oteri from SNL. Casey S. was stunning in person, very calm-spirited and always smiling. Rachel was hilarious! Always jabbing in comments about Ben or something that happened on the season, she laughed a ton and surprised me with how much personality she had!

Jaclyn was the wild child of the bunch, hahahahaha. I am smiling just thinking about all the things I can’t type. She was/is awesome! So much fun. Jennifer was someone I was immediately drawn too. Incredibly engaging, very outgoing, and the kind of person you want to be around and have fun with. Kacie was just how she seemed on the show, in person: soft spoken but very warm and endearing. It seemed to me like all the girls liked her the best. She was so sweet. Loved her.

And for me Emily was the best part of the night. We were super flirty for the first part of the night at Katsuya, didn’t dance that much at Drais, but were bouncing flirty looks at each other all night. She looked incredible, has a contagious smile and my only regret of the weekend was not getting more alone time with her.”

From The Bachelor Expert: “It is made clear that Nicki and Kacie tried to not hate for as long as possible. The women tell America how Courtney has two personalities. I hope she is the “nice” one and not the human sacrifice Courtney. The women are infuriated, Courtney claims to made an effort with the women.

Casey S, her sidekick stood by her side. This did not defuse the situation. “Winning” doesn’t always mean winning. Was she under a rock during the Charlie Sheen train wreck?

Courtney apologizes in a roundabout fashion. There is so much to apologize for and so little time. At least everyone got a word in about her behavior. Courtney brought on the tears and said, “I cared for Ben.” Past tense? I don’t think that was part of the plan. It would have been interesting to leave Courtney and Ben out there during the Women Tell All, to see who Courtney acts like, Thing 1 or Thing 2. ”

Read more from The Bachelor Expert….

From West Lee: “Loser: Jamie. She told Ben if things didn’t work out with whoever he picked she would totally get fancy with him again, whereupon his penis promptly crawled up into his body cavity.

Winner: Elyse’s tanning salon. Good lord.
Loser: Me, for not going to that reunion. Looks like I missed my chance to be on Bachelor Pad 3.

Winner: Kacie B. She didn’t say or do anything particularly noteworthy, but she’s beautiful, sweet and seems very down-to-earth, so she’s always a winner in my book. I hear she’s a Vols fan, but she got the color orange right at least (Go Tigers!), so she gets a pass.  Ditto for Nicki (except for the Vols part).

Loser: Anyone trying to figure out if Courtney’s a decent person or not. Do you take her for who she is around Ben–sweet, goofy and funny? Or do you take her for who she was around the other ladies–cruel, vindictive and snide? Do you trust her apology and her tears of remorse at the WTA, or do you assume her acting coach and agent have been working some overtime the past several weeks? I’m lost…I really am.” From Mark Lisanti of Grantland.com: “If you’ve successfully positioned yourself as the season’s antagonist, you’re going to be required to face a “Tell All” firing squad of the angry, jilted bachelorettes you utterly dominated over the previous weeks. They will come armed. They will come thirsty for vengeance. They will demand that you “apologize,” and that you admit that you have “taken Lessons From The Experience.”

Wait them out, let them have their say, nod with affected sincerity until you are ankle-deep in the empty 9mm clips of their emotional firefight. Then “apologize.” Tell them that yes, you have Grown As A Person and Have Learned So Much About Yourself, and that You Could Have Handled Things Better. Inflect all sentences as questions, the subtle, rhetorical equivalent of crossed fingers behind your back, because you are sorry about nothing.

What are you apologizing for? Winning? Outmaneuvering an overmatched battalion of tactically flatfooted enemies? We remind you: You’ve already won. You’re sitting at center stage, not on the riser with the gang of tomato-hurlers who keep shouting over each other in a last-ditch attempt at TV glory. Shed a couple of crocodile tears just for the empty thrill of it, a masterful display of your virtuosity with your emotional instrument.

Next week America will be watching you standing atop a snow-capped mountain in Switzerland, or, if the producers get really ambitious, bounding in slow-motion across a desiccated lunar lake toward a floppy-haired astronaut proffering the two-carat prize you don’t actually want. In any case, it doesn’t matter. Next week, you’re not just a model. You’re your most perfect self.

From Lindsay Robertson of Vulture.com: “Finally, finally, finally, they bring out Courtney, who looks effortlessly gorgeous as usual in a comfy-looking blue silk dress. Mean Courtney is nowhere to be found, however, as this Courtney takes the attacks by the other women gracefully, and you can tell that she actually feels bad. She doesn’t stoke the Courtney-hate fire one bit, and just apologizes over and over. Twice, she mentions how her family and friends have been affected by the tabloid frenzy surrounding her, and she seems legitimately upset. Then she says one (maybe) telling thing: “I cared for Ben and I still do care for Ben.” It was an in-the-moment comment. Could the past tense mean Courtney, who has long been favored to win this competition, might have actually lost? We’ll have to wait until next week.”

From Dana Weiss (aka Possessionista): 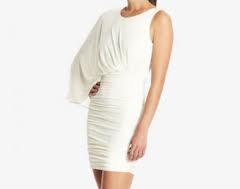 2 thoughts on “‘The Bachelor Season 16: The Women Tell All’: Your faves weigh in”