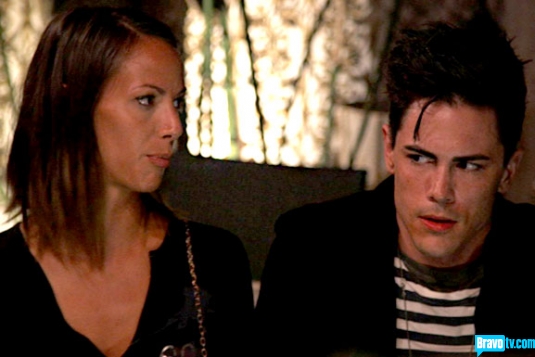 Kristen is glad she has cleared her conscience by telling boyfriend Tom Sandoval and friend Stassi Schroeder the truth about her sexcapades with Mr. Jax Taylor, but she is still having some serious emotional anguish over the whole situation.

She starts her Bravo Blog by proclaiming, “Hallelujah. No more dirty secrets or lies,”…... “This past summer was a frightening roller coaster ride. I had so many skeletons in my closet and the truth will ALWAYS prevail (especially if you’re on a reality show).”

She then goes on to express her bitterness towards Jax:

“I may have felt differently if Jax had come to me privately and said, ‘This is eating away at me, we have to tell them.’ He didn’t announce it because he had remorse and that’s what really bothered me. At that point, he had already screwed Tom over by confessing the Ariana secret and he had lost Stassi so in Jax’s mind he had nothing left to lose.”

Kristen goes on to say that Jax was driven by: “attention/relevance in our group…… “I don’t, for a split second, condone what I did and couldn’t be more sorry and ashamed. I do, however, think it’s bulls— that everyone turned their back on me and didn’t even bat an eyelash at Jax.”

It also sounds like Kristen is still pining for Tom–the two officially ended thing a few weeks ago when Kristen moved out of their apartment and it sounds like Tom was ‘the decider’, because he is now with Ariana Madix according to our source:

‘Tom and Ariana are hanging out. About an hour after the finale he started following her on Instagram…..It is official that Tom and Kristen have broken up. They are all still working at SUR and Ariana still works at Villa Blanca as well. I think after the reunion show next week, Tom and Ariana will make it official. Jax Taylor did tweet his fans about two weeks ago saying  “ You will never believe who is hooking up at SUR, even I can’t believe it!” I will hopefully know more in a couple of days.’

Back to the Bravo Blog. Kristen claims:

“The lies started eating away at me and I could barely look at Tom. I started lying to myself, silently pleading for it to all go away. Hoping for a sudden turn of events that Jax would have some sort of loyalty to me and tell everyone he had made the whole thing up. Everyday, seeing Tom defending me and our relationship while I was lying straight to his face. . .was heartbreaking.”

“I knew if I told him that I would lose him, but it was better than staying in a tumultuous and dishonest relationship. Yes, he had cheated on me multiple times with several girls over the five-and-a-half years we were together, but he didn’t deserve this. I can admit this was the lowest thing I had ever done and I had to put my big girl pants on and own it.”

“When I finally admitted the truth to Tom, I don’t think it really hit him. He left the apartment, came back and told me to get my shit together and get ready for Scheana’s party.”

” I knew that no one would be surprised that it was true, but they would be shocked that I actually admitted it. Tom and I decided that Stassi was the first person I had to speak to. I wasn’t going in there to make a grand announcement. I had to look her in the eye and own my mistakes. I wasn’t surprised that Tom had, once again, come to my defense.”

Here is where Kristen hints that she really did not want to end things with Tom and that she may blame Jax–even though she claims to admit fault.

“I’ve never seen Tom get physical with another guy ever, but Jax’s lack of remorse and respect was begging Tom to punch him. I don’t condone fighting but Jax really did deserve it. It wasn’t premeditated but the whiskey was flowing and after all Tom had been through the past few weeks, it was bound to happen.”

And here she confesses the regret:

“As messed up as our relationship had become, I will never have with anyone what I had with Tom,” …. “As hateful as we had acted toward each other at times and beyond all of the lies and disrespect, deep down we both loved each other very much. I know how counterintuitive that sounds, but there aren’t words to describe the love I will always have for him. ”

Sounds like a girl that is devastated that Tom has officially ended things. At any rate Monday’s reunion is going to be explosive.