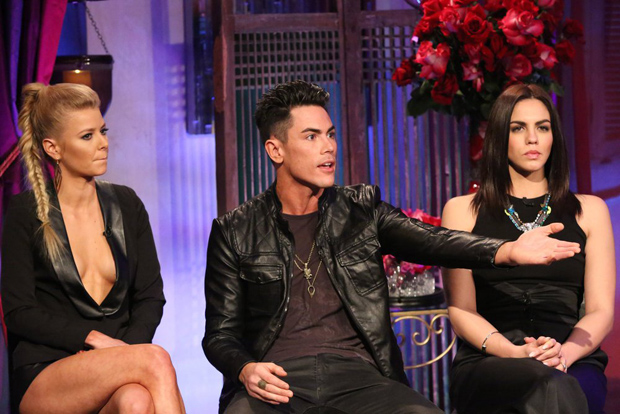 We all know how Kristen likes to take to Twitter to express herself….lucky for us.

So we have a few tweets to read and assess her feelings about the situation.

She is obviously expressing her disbelief that Tom and Ariana JUST kissed saying….

‘stop with this “they just kissed” shit. laughable. I don’t condone what I did but at least I am honest.’

Then she tweeted this:

‘I was angry at the reunion, it was still fresh for me to see T & A together. Time heals all wounds & I wish @TomSandoval1 the best.’

‘Tom and I are currently broken up, I have moved out and we are both in a much happier place. #PumpRulesReunion’

Kristen also revealed on the reunion that she was dating Tom’s friend James Kennedy. In regards to her new relationship with James she said:

‘let me be clear – James is not ‘Tom’s friend’. he was our friend and one of my best mates. Tom just wanted to point fingers. #move on’.

‘what a complete psychopath. those with dirtier skeletons shouldn’t throw stones..

So the current status of Tom and Kristen is broken up but the status changes by the minute. Stay tuned for more telling tweets from Kristen Doute.

1 thought on “Is Kristen Doute mad at Ariana and Tom?”