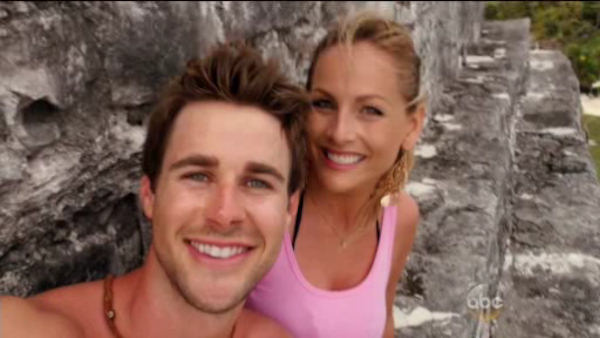 Well the premiere of Bachelor in Paradise was pretty epic and left us on a serious cliff hanger–wondering who in the world Michelle K hooked up with that prompted the whole production crew to bang on her hotel room door and demand she answer some questions from host Chris Harrison?

And how, for the love of God, could Michelle refer to Chris Harrison as “just the host!”?

We also knew that 2 new guys would be coming to replace Daniella and Michelle K and one of them was Chris B.

The show kicked off with Host Chris Harrison showing his versatility and his professionalism as he tried to break down the Michelle K situation.

Luckily there was a BiP “cast handler” (oh my God! I love that they have “handlers” who was able to fill in some gaps for us. This show is turning into more and more of a hostage situation by the minute). Lauren, who makes the most amazing statement ever:

“So I was walking one of our kick-offs, Daniella, to her room with our psychiatrist…”

We learned that 30-year-old Michelle, somewhere between baggage claim at the airport and arriving to the Pad in Tulum, fell in love with a boom mic operator, who we now know is Ryan Putz! and decided to forgo her role as an individual on the show.

We have been waiting for YEARS for someone to fall in love with the boom mic operator! Thank you ABC and Ryan Putz.

So Ok, actually the cast was in another hotel a few days before production and Ryan was in the room next door to Michelle K. and they fell in love.

And apparently the poor guy dove out of her hotel room window trying to save his job and broke both of his legs! You can’t make this stuff up!

Clare Crawley is asked out by Chris B who comes to Tulum armed with a date card. She is skeptical of Chris after his multiple hook-ups within the Bachelor Nation franchise. The two enjoy a couples massage. Then she is asked out by Zack Kalter the 29-year-old Children’s Book Author from Newport City, CA and the two explore the city. Clare claims Zack makes her feel “like he is everything she’s been waiting for.” Needless-to-say, Clare falls in love easily.

Lacy Faddoul and Marcus Grodd have become a “couple” after a few dates and both are off limits for the other contestants. The two enjoy a “dreamy dinner date at the exotic eco-archeological park, Xcaret,” but Robert is still pining for his girl Lacy. After all her decision to choose him over Marcus was 80/40 so obviously he thinks he still has a shot to get her back.

Things are starting to fizzle between Michelle Money and Marquel because Marquel puts on his pearl necklace and gets a bit judgy when he accuses Michelle of drinking too much. Marquel is an enneagram 6. He needs safety and security so this was causing him anxiety. His days are numbered.

Elise Mosca tries to make Dylan jealous with Chris Bukowski but the effort backfires. Dylan gets a date card but does not ask out Elise. In fact, Elise claims Dylan was giving her “mixed” messages because he would not accept her rose after she hooked up with Chris B! Amazing!

The Episode ends with Marcus Grodd finding a note in someone’s luggage exposing that he has a girlfriend back home. The cast learns that it is none other than bad boy Ben Scott who has come on the show to “redeem” himself! Ha!!!! Should have thought of that before you got a girlfriend 3 weeks before going on the show.

Yes Ben has been dating a drop dead gorgeous 5′-11″ model named Lindsay Higgins from Dallas Texas which is why he never expressed the slightest interest in anyone on the show.

At the Rose Ceremony Elise is rejected by Dylan and tells him to step out of the frame so she can deliver an amazing diatribe on “love”. I honestly did not understand a word of it. All that kept going through my mind was the Cure song “Elise it doesn’t matter what you say….” — Remember that?

Here’s how the roses went: