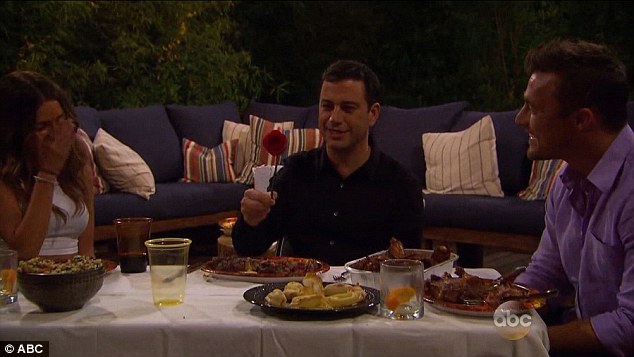 Next week host Jimmy Kimmel crashes The Bachelor and takes over the show as guest host. Jimmy takes the remaining amazing ladies and shows them his “Amazing Jar,” which everyone has to contribute a dollar to if they say the word ‘amazing’—amazing! Kimmel also plans Chris Soules dates which all coincidentally wind up in a hot tub.

Jimmy tricks Chris and Kaitlyn Bristowe, 30 into thinking they will be going to a high-end members only ‘club’ for their date, but instead they just go to CostCo to get steaks for a barbeque to take back to Chris’ pad (which is next door to the mansion).

The two made the most of the less than glamorous one on one and rolled around in an inflatable human hamster ball–amazing!

Kimmel joins the couple for the intimate barbeque where Kaitlyn reveals she had previously dated a farmer and that she would not be angry if Chris slept with ladies in the Fantasy suite–so she is a keeper for sure.

UPDATE 2/24/2015: Reality Steve has confirmed that Kaitlyn Bristowe will be the next Bachelorette

Later after a farm-themed group date Chris and 29-year-old Whitney Bischoff enjoy a romantic date in wine country when they ‘randomly’ stumble upon a wedding and decide to crash it. I love the serendipity of The Bachelor dates–the impromptu picnics that appear in the middle of nowhere as if by magic, crashing a wedding with a giant ABC camera crew in toe–all the things that happen in regular courtships.

The two wander around a wedding and Whitney claims that the show has finished taping and they are engaged—hmmm foreshadowing?

So producers follow the couple around with their I-phones and get some amateur footage of the couple dancing and socializing with guests.

Jimmy returns to the mansion for the cocktail party and more fun and hijinks and meltdowns.