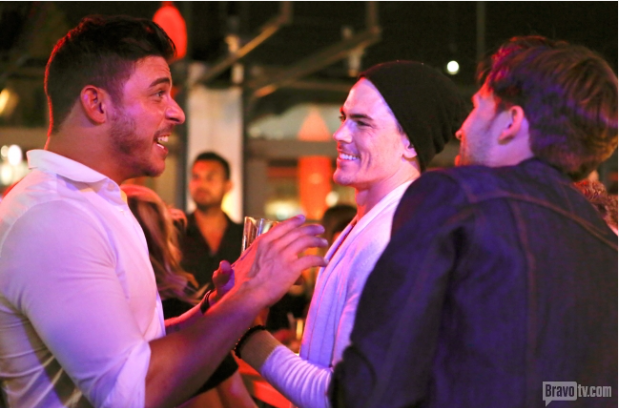 Last night on Vanderpump Rules the cast flew to Miami for Scheana Marie‘s bachelorette party. This was shortly after Jax Taylor allegedly “banged the sh*t” out of some girl in the Hard Rock hotel bathroom in San Diego cheating on girlfriend Tiffany Matthews.

Tom kept perseverating on the sitch since Jax was accusing him of cheating on girlfriend Ariana Madix in Miami in March.

Tom Sandoval now claims to be a bit ashamed of throwing Jax under the bus at at Micheal Shay’s bachelor dinner in his Bravo blog.

“First things first, I would have never even brought up any of Jax’s extracurricular’s at Shay’s bachelor dinner if I wasn’t so heavily pushed by others. It’s definitely not my style, and I’m not proud of it.”

“When I called Jax out about the San Diego girl, I was doing so because in the past — if and when Jax has ever had the smallest piece of dirt on Schwartz or I — he has embellished on it and then gone on to tell anyone with two ears. Then when confronted on this embellished dirt that he has had, he’s denied it to our face.”

Then Tom says something interesting about his words that made it sound like he was admitting to lying about cheating on Ariana.

“When I told Jax that “I shouldn’t have to ask you to lie for me,” I’m quoting Kevin Hart, in that when you’re best friends with someone, you should always have their back. At this point I’m wanting Jax to know what it’s like to have someone like Jax as your friend. The difference is I’m not embellishing nor am I denying being the source of the information. ……. If you are the source of Jax looking bad in anyway, he will stop at nothing to make you look way, way worse, even if it is with lies.”

“The conversation Jax and I had privately had absolutely nothing to do with the dumb, empty Miami allegation. I’m talking about years and years of Jax insinuating or guessing or trying come up with a piece of information that he can turn into something bigger, to either take the heat off himself or to get attention. Jax WANTING or thinking something happened means to him that it did happen, and then some, and then he will go behind our backs and say things that aren’t even possible for the reasons I listed above. Jax lies in place of actual information. He takes the smallest iota of an idea or a rumor and blows it up into an elaborate story with tons of inconsistencies because it is all a lie.”

Sounds like someone trying to dig them self out of a deep hole.

Maybe Jax is not the only one guilty of “lying”.

Speaking of “dirt”, previews for next week address gay rumors surrounding Jax Taylor. A mysterious man shows up from Jax Taylor’s past. Did he have a boyfriend in Miami?