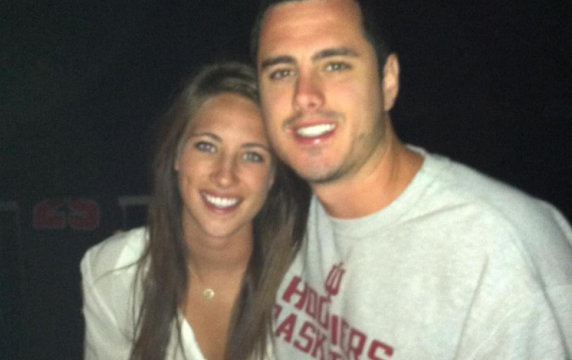 So what do we know about her and her relationship with Ben? The two dated from 2012 to 2013 and it seems from social media that he was really into her.

Shaelin is from Shoals, Indiana, and currently lives in Bloomington.

She was born May, 16, 1993 in Punta Gorda, Florida to mother Jo Ann Showalter, and father Stephen Jeffrey Adams. She has a 24-year-old brother named Ethan Jace Adams. She received a Bachelor of Arts (BA) degree in International Business from the University of Indiana in 2015 where she was a sorority girl with Alpha Chi Omega. Looks like she did a Business Internship Program in Dublin, Ireland for 3 months last summer.

She is presently an Intern at a Marketing and Advertising company Bloomington, Indiana called Giant Noise in. And she has also tried her hand at modeling.

In 2013 she got an internship in Austin Texas. Perhaps the relocation is what ended things.

“I know she wont brag so I will for her congratulations @shaelinjaid on her internship in Austin, TX, they are very lucky to have her!”Some weekend getaways……24 Mar 2013″Thank you @shaelinjaid for a great weekend! And a special shout out to @coachbarnettiu and the hoosiers on a trip to the sweet 16! #iubb”href=”http://okhereisthesituation.com/wp-content/uploads/2015/04/ww.png”>

They are still together on Ben’s birthday 2 years ago….

“Enjoying a much awaited day with @shaelinjaid, could not have asked for a better present. Thanks all for the bday  wishes!” no better company on the beach than @shaelinjaid in Bahia Honda, Florida”

So, it sounds like Ben is a very nice guy and Shaelin is a very good girl. Both are also very Christian.

And it looks like he was really in to this girl. So if I were Kaitlyn Bristowe or Britt Nilsson I would want the status on this situation.

Chris Soules tells Witney Carson 'I love you', not ready to leave LA