Is Caila Quinn angling for The Bachelorette and not Ben? 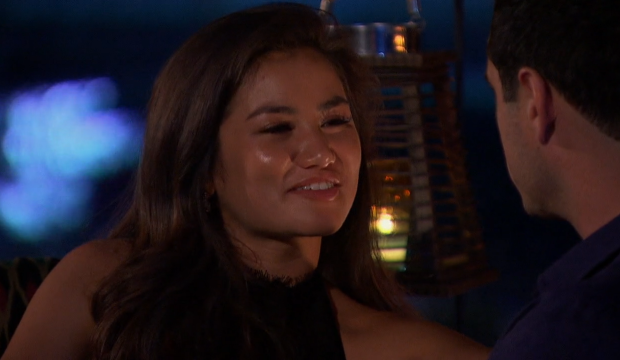 Caila Quinn aka “sex panda” landed a coveted second 1 on 1 in the Bahamas indicating she was a clear frontrunner, but I’m not totally sure Caila wanted to be the frontrunner. Actually, let me clarify. I think Caila is like Kaitlyn Bristowe on Soules season….she doesn’t want to be number 1 girl she is angling for the number 3 spot, because her convo with Ben on Monday night was so cryptic and bizarre

After sensitive Ben confides in Caila that he is looking for a girl he can “cry” with, Caila confesses,

Caila is clearly scaring Ben because she doesn’t seem that vulnerable and Ben has been hurt by the pretty girl before. In fact I suspect that Caila reminds him a bit of his ex girlfriend Shaelin in that both are “Performers”. Both have that dangerous charm and charisma on top of their model good looks. And both seem a bit fickle about getting too tied down.

But then Caila says, “I feel like I love you, but I dont know why I cant share…maybe its just that im not ready.”

I translated that to mean…”I’m not totally in to you, but I can’t really fake it that well and I love being on camera and I’d like to take this 15 minutes and run it into at least an hour of fame. So lets keep things ambiguous so I can be the number 3 girl like Kaitlyn”.

Caila at the tender age of 23 is obviously used to having men wrapped around her finger and knows how to work them. She says “My greatest fear is that I can’t totally and completely fall in love with somebody” (aka I am not that in to you)…”my greatest fear would be breaking your heart” (aka I am going to break your heart).

Poor Ben. She is going to crush him.

Ben said this in his People blog,

“I knew that asking Caila on a second one-on-one would cause some controversy. But I felt that it was something I needed to do. Caila had caught my eye and my attention from the very beginning – I mean from the moment she jumped in my arms out of the limo really. But our first date, as fun as it was, really didn’t allow us to get to know each other. And for the chemistry that we had together, it still seemed too surface-level to be getting this close to hometown dates.”

In other words Ben is really in to Caila, and worried that she is not so in to him. Keep in mind she had also just dumped a boyfriend like 2 months earlier in July. Maybe she is having second thoughts? Nah, probably not. She is just all about #3 because we all know what #3 means on The Bachelor!—-The Bachelorette!

“If last week in Mexico taught me anything it was that I could not afford to waste time and keep women that I just liked. I did not come on The Bachelor to just find a great girl that I’ll date for a while. I really came her to find a future wife. So this date needed to happen. I needed answers when it came to Caila.”

I love how seriously Ben takes his role as Bachelor. He is REALLY looking for a future wife while most of these women are looking for a permanent gig on ABC “looking for love”. And he does have to chop chop because this is only a 9-week journey and he has already wasted enough time with Olivia. He has got to get down to brass tax.

Ben understandably “was so confused” by Caila’s cryptic words. He goes on to say, “and I wasn’t lying when I said there was a point in that conversation where I was pretty positive that Caila was breaking up with me.”

I thought she was breaking up with you too! And sweet sweet Ben…he does not read sub-text and I am guessing this was the problem in his last relationship. So he takes Caila at face value and decides that she does actually “love” him.

So Ben keeps her which is great news for us because I want to see her Hometown since her family is loaded!

Awwwww, just the fact that he refers to her as his “future wife”! This is going to be an epic yet inevitable break up to watch.