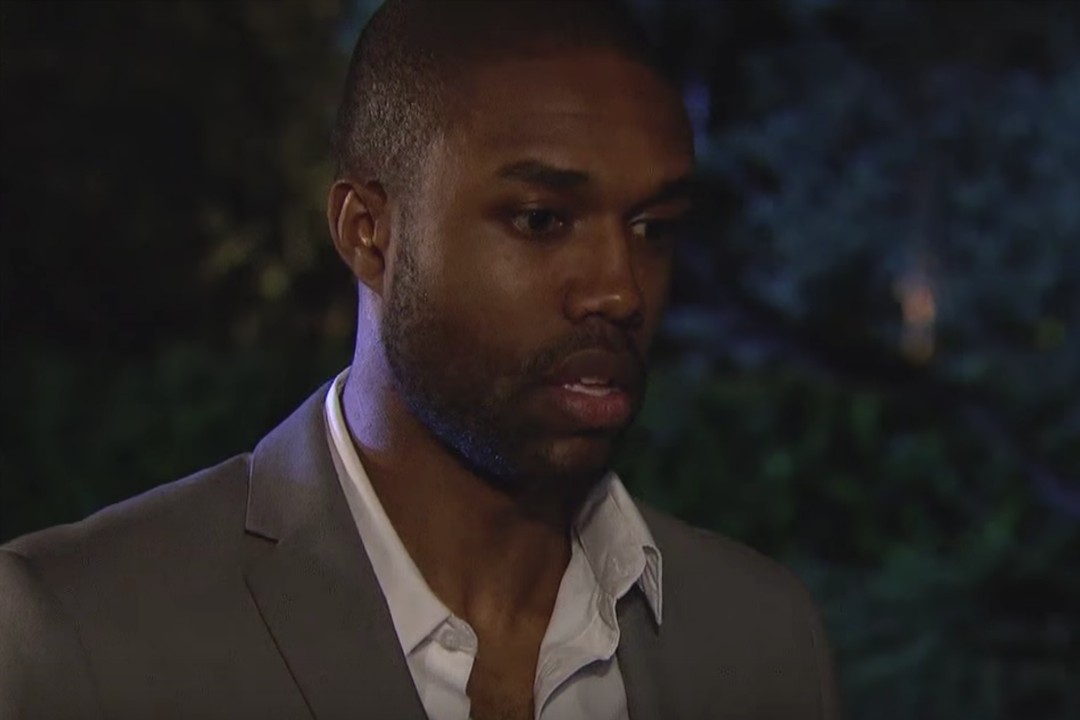 The Corinne Olympios – DeMario Jackson situation unfolding on season 4 of Bachelor in Paradise has been epic. In the long 15-year history of The Bachelor franchise never has anything of this magnitude occurred. But it’s also very confusing. I have been struggling for days to figure out who exactly these two have a beef with and who exactly they are intending to sue.

And this latest interview with DeMario has not made things any clearer. Apparently Jackson’s beef is not with the girl accusing him of rape, its with producers! In the interview Jackson claims that he’s the victim of a conspiracy.

E! News recently sat down with DeMario to get his take on events.

So here’s the situation from DeMario’s perspective.

Not surprisingly he contends that Corinne instigated the sexual liaison after the two had been drinking with cast members at the pool.

Jackson said Olympios removed her clothes, he then removed his and they began “kissing, rubbing (and) touching”.

“Things got wild because it was more her being the aggressor, which was sexy” …. “When you have a very attractive girl telling you what she wants, it’s like a very, like, ‘Wow, OK! This is hot. … I like it.’”

Given that we have seen Nick’s season of The Bachelor we know DeMario’s claims are not that far-fetched.

He claims things really ‘escalated’ as they sat at the edge of the pool and dangled their legs in the water.

“She gets up out of the pool and puts her lady parts right on my face,” Jackson said.

It’s also not surprising to hear that Corinne did all of that sober.

Jackson said, ”that night was probably the wildest night of my life.”

And after the alleged incident Jackson says the next morning he and Corinne got breakfast with some fellow cast members and everyone reminisced about the craziness of the night before.

I suspect all of this on video somewhere and none of this will help Corinne’s legal case. I do believe DeMario. I also believe him when he says he thinks this was some sort of ‘conspiracy’. Funny thing is I said that right away.

I don’t think it was specifically a conspiracy geared at him. I think it was a conspiracy geared at demonizing The Bachelor and shutting it down for good. I mentioned earlier that I’m pretty sure I met the producer in question at Burning Man, Shelby Adams and she seemed up to something to me. She was talking to me and a friend about the new job she just got. Later told us the ‘job’ was a producer on The Bachelor.

What is the conspiracy?

I think Corinne encouraged by her producers, was looking for someone to ‘victimize’ her and threw herself at every guy there until someone bit.

And unfortunately for DeMario he was the first guy to ‘bite’. He put his pie in her pie-hole. In case you needed clarification Jackson was having oral sex with Corinne in full view of other contestants, producers and cameras. They did not have sexual intercourse because Jackson could not get an erection, but clearly the sexcapade was salacious enough to do the trick.

“I get every guy’s biggest fear. I get like straight whiskey dick,” he said. “I’m like, kill me, kill me kill, me, and she’s like, ‘No, it’s okay’ … And then I get out of the pool and I have like my legs in the pool like this and I’m kind of just like hanging out really, and then, this is when she like gets up out of the pool and just like puts her lady parts like right on my face.” Jackson also said: “It was nothing that had never been seen on Paradise before. It was something that — there was nothing like crazy or like wild. We were both super coherent. We were both speaking, like… never once did it hit me like, ‘Man, this girl’s too drunk,’ because we were still talking. We were having, like, conversations.”

Anyhow the event prompted Corinne’s producer to raise some hell leading to the immediate shut-down of production. But the funny thing is the producer had not even seen the video in question to see if Corinne appeared to actually be a ‘victim’.

So did the conspiracy work?

Sort of. As a result of the uproar and threat of legal action from Corinne the show has implemented some very strict and rather absurd procedures that will make it all but impossible for contestants to really bring any drama. Now contestants will be forced to sign a consent form prior to engaging in sexual intercourse with each other and they will be forced to hand over any prescriptions to producers prior to filming.

Yeah just imagine two contestants in the throws of passion, enter a producer with a notary in tow, clipboard in hand requesting/requiring you to sign a consent form to engage in sexual intercourse. Talk about a buzz-kill!

Additionally there will now be a 2 drink maximum to ensure no one is too intoxicated to consent. In other words the precautions will ensure any impulsive or unbridled passionate madcap antics will be shut down before anything good happens.

Neither Corinne nor DeMario is planning to return to the show which will air sometime in August.