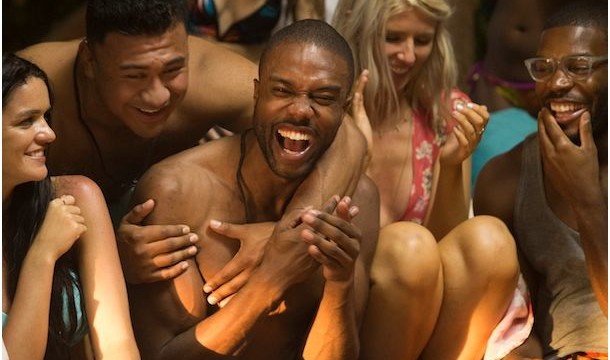 Obviously we all know a gigantic situation goes down — and I do mean ‘goes down’, between Corinne Olympios and DeMario Jackson, but there will certainly be more to the season since that sitch is resolved by night two of the two night premiere.

1: The girls are bringing all the personality on season 4 of Bachelor in Paradise. The men are cute and all, but very ‘gym, tan, laundry’ this season.

I thought I liked Ben Zorn until his conversation with Raven Gates. Ben immediately launches into a long diatribe about his extensive knowledge and passion for dogs. It doesn’t really make the best impression on Raven, but lucky for Zorn, Robby Hayes is coming soon and Ben will look like a serious prospect after her 1 on 1 with the resident Ken Doll.

3: Dean Unglert is seriously in high demand! 26-year-old Deanie baby is at the top of everyone’s list (unbeknownst to Robby Hayes). Kristina Schulman is second to land in paradise right after Dean and the two bond over their challenging family situations.

But then Danielle Maltby arrives looking for Dean and only Dean. When she sees the connection he has already established with Kristina she concedes defeat and begins pouting and confiding in new bartender and pal Wells Adams. Hmmmm, perhaps a potential love connection?

4: Wells emerges to relieve Bartender Jorge of his duties, but he is contractually obligated not to develop chemistry with anyone in paradise. (Incidentally I don’t buy that Wells won’t find love. He is now the forbidden fruit after all, and will certainly be in demand.) 5: ‘Ol St Nick has a drinking problem. 33-year-old Nick Benvenutti is on a serious bender and gets the worst impression rose for approaching Jasmine sh!t faced and telling her he’s ‘there for her’.  Sadly and shockingly Jasmine doesn’t wait for Nick to sober up to give him a shot.

She moves on to Matt Munson who is also there for her. The two head to a drag bar where Matt gets dolled up by the drag queens and Jasmine gets freakishly turned on. Let the choking begin!

6: Then there is poor Lacey Mark! Lacey got really short-changed on Nick Viall’s season of The Bachelor, but thankfully now she is getting a second chance.

But sadly on day one, while connecting with Iggy Rodriguez, she gets news that her grandfather has died! Couldn’t grandpa hang on a few more weeks till Lacey found love!? Lacey asks Iggy to wait for her to return.

6: Taylor Nolan is terrified of Corinne after their epic 2 on 1 where Taylor questioned Corinne’s IQ. Luckily Derek Peth is lazer focused on Taylor and can keep her occupied long enough for Corinne to be booted off the show. Situation averted.

7: Robby Hayes hair! Robby has taken hair-styling to a whole new level. The 28-year-old trendsetter has invented a new cutting edge hair style of epic proportions. There are feathers and fades. There’s a deep left part and a rightward swoop. The cast is mesmerized. I am mesmerized by the fact that Robby is wearing eye liner and eye shadow! Needless to say all of the priming and primping has gained Robby the nick name ‘Ken Doll’.

8: Amanda Stanton has taken the job of finding a baby daddy for her two young girls very seriously. After bashing her ex boyfriend Josh Murray to host Chris Harrison, she tells Chris that she has been aggressively scouring Tinder for a mate and is presently on a waiting list for a celebrity Tinder account.

I guess Tinder is waiting to see if her celeb status is elevated by her stint on BiP. Talk about pressure!

9: Alexis Waters is hot for DeMario and sadly the two seem to have some chemistry, but as we know DeMario’s stint is cut very short and he does not get to return to pursue things.

10: The premiere should have just been called CYA lawyer speak for ‘cover your ass’. Host and situation arbitar Chris Harrison gathers the cast to discuss the ‘situation’ between DeMario and Corinne and is sure to get everyone on record consenting to any actions they may take while in paradise.

Harrison comments that a team of attorneys, producers and crew reviewed the tape in question to see if there was any misconduct by DeMario. I love that a whole crew of professionals had to review the oral sex encounter that occurred alongside the pool.

Unfortunately for DeMario he was already on thin ice and the event with Corinne just sort of ended his chances for redemption. In terms of who was at fault in that sitch–in my humble opinion, both Corinne and DeMario were.

I actually felt really sad knowing that Corinne’s time is cut so short. Seeing her on the premiere reminded me of how much fun she was to watch. But alas when you threaten ABC with your team of attorneys, you are not endearing yourself to the guys in charge.

Anyhow, thankfully after the brief 10-day hiatus everyone was flown back to paradise to resume falling in love.

Robby Hayes bombs on 1st 1 on 1 with Raven Gates

Stassi Schroeder discusses why she and boyfriend Patrick Meagher split