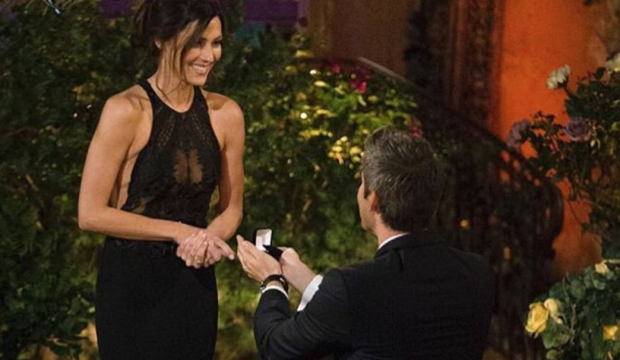 27-year-old Publicist Becca Kufrin of Prior Lake, Minnesota made a big impression on Bachelor Arie Luyendyk Jr. on Monday night when she had Arie get down on one knee and propose on the freshly hosed driveway. And while she did not get the first impression rose she did get a rose and she will likely be a formidable opponent to the remaining ladies in the race.

So what do we know about Becca thus far?

Her mom is Jill Kufrin and she has a 29-year-old sister named Emily who recently got engaged.

Her dad, Steve Kufrin, died of brain cancer in September of 2009 at the age of 66 when Becca was 19 years old. ‘Not a day goes by that I don’t think about the angel that is Steven Karl (with a K) Kufrin. He gets the Father-of-a-Lifetime award for putting up with me between the ages of 3-17. Happy Father’s Day to the most suave man this side of the Mississippi has ever seen’, she captioned on Instagram.

Her mother is currently in remission from breast cancer.

Becca attended Prior Lake High School and graduated in 2008. She graduated from Minnesota State University with a Bachelor’s of Science degree in Communications in 2012.

She works for Skyaa as a Senior Account Executive. Ugh. Unfortunately I have had a run in or two with Skyaa after trying to chase down one of their writers. They are one of those companies with very ambiguous but important sounding services. My experience with them was with a guy who was managing writers who wrote really lame, click-baity, poorly written content for sites like WetPaint.

In my opinion it’s basically an online content sweatshop. Lets hope that wasn’t what Becca did there or that she is moving on to better things like her tell-all book about starring on The Bachelor. The tattoo on her wrist is Psalms 61:2

‘From the end of the earth I will cry to You, When my heart is overwhelmed; Lead me to the rock that is higher than I.’

She has an arrest record–a small one–let’s not be too hard on her. Kufrin was arrested for underage drinking in a complaint filed with the Blue Earth County District Court in Minnesota.

Kufrin pled guilty and paid at least $431 in fines. Becca dated Ross on and off for about 7 years. And you will get to meet Ross when he shows up later in the season to try and win Becca back.

7 Things to Know about Chelsea Roy