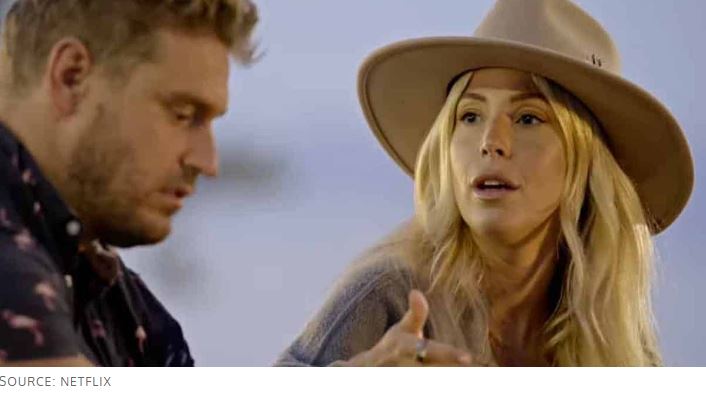 Love is Blind season 2 Reunion just aired and it left the audience with so many questions about potential post show hook ups.

One of the saddest breakups was that of Shayne Jansen and Natalie Lee who seemed absolutely perfect for one another until the night before the wedding when Shayne unleashed on Natalie after a few too many cocktails.

Poor Shayne is dealing with a lifetime of insecurities and impulse control problems much like his doppelganger Gary Busey. And this rather stressful situation sent him into a tailspin.

On the reunion Natalie was forced to watch the clip Shaina Hurley’s and Shayne Jansen discussing their attraction to each other.

And she had to watch a clip that showed Shayne torn between his feeling for Natalie and Shaina.

“I definitely felt betrayed by both Shayne and Shaina, quite honestly,” she said. “The fact that Shayne said ‘If you’d told me two days earlier, it could have been, you know, potentially different’ — it’s not something he was telling me. I felt like by the last set of days, he assured me it was just going to be me. It was only me. So seeing that there could have been a change if he explored another connection was really hard.”

Natalie then turned to Shaina and told her that she felt she was being “dishonest” about her true feelings for Shayne.

In regards to where it all went wrong, Natalie said their explosive fight before their wedding day was the moment that “changed everything” for them and was a “wake-up call” that led her to say no at the altar.

Natalie recounted that Shayne called her “the worst thing” that’s ever happened to him and said he “hated” her.

Nick and Vanessa questioned Shayne about rumors that he was dating Shaina. Shayne deflected the question and redirected the hosts to Shake and Deepti, but he addressed the question later on Instagram.

He wrote, “Shaina and I are cordial and have hung out in group gatherings with the cast (with Natalie), but we have never had nor will ever have a romantic relationship. I wish her all the best.”

“Natalie Mina Lee. Where do I start? This journey with you will be something I’ll never forget. It was easily the best time of my life and I would do it all over again knowing I get to spend more time with you. From our first date eating In-N-Out and you getting both milkshakes to our walks around Grant Park. You are the most beautiful soul and you really brought out the best in me as a man. As a man watching our story over again I’m remorseful for my actions and all I can do is learn from them to be a better man. I’m proud of being vulnerable and being as genuine as possible. I don’t know what’s next for us but I do know that I will never stop loving you.

“To put some other rumors to rest, Shaina and I are cordial and have hung out in group gatherings with the cast (with Natalie), but we have never had nor will ever have a romantic relationship. I wish her all the best.”

Shaina responded, saying “Thank you for taking the stance on finally clearing this up!! Wish nothing but the best for the both of you individually and together .”

There is now a rumor that Natalie Lee and Salvador “Sal” Perez may be dating.

UPDATE 9/15/22: On the Love is Blind season 2 — After the Altar — show that aired tonight Natalie decided to stop protecting Shayne and revealed that he and Shaina had been exchanging very flirty, sexy texts while Natalie and Shayne were giving their relationship a second chance and THAT was the real reason that Natalie walked away for good.

4 thoughts on “Are Love is Blind Shayne and Shaina dating?”