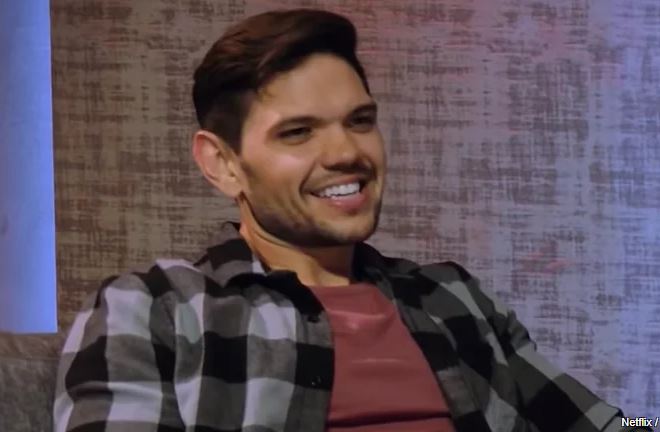 Kyle Abrams is one of the stars of Love is Blind season 2 which premiered on February 11, 2022 on Netflix and the viewers are already excited for the show.

Kyle Abrams’s father’s name is Michael Abrams, and his mother is Gwen Abrams. His sister is Brittany Schiffley.

In regards to Kyles ethnicity, he told TikTok users today that he is Native American and German.

Recently, Abhishek “Shake” Chatterjee accused Kyle of being a ‘serial cheater’. “Hey @KyleAbrams10,” he wrote on an Instagram Story photo of the two on Mar. 1. “You’re a serial cheater and everyone in Chicago knows it. Hope your 6 pack makes up for your lack of loyalty.”

The couple did not make it to the altar. Shaina admitted she “should have said no” to Kyle’s proposal because Shaina was a devout Christian and Kyle was an atheist.

On the reunion Kyle confronted Shaina about her conversation with Shayne shortly after accepting Kyle’s proposal.

“Honestly, looking back on it, I should have said no right away to you. 100 percent,” she told Kyle. “I actually do take full ownership. I could have avoided a whole bunch of drama and mess, 100 percent. And I’m owning that.”

Shaina, to that point, argued that she “didn’t know what [she] was feeling” at the moment. But she felt she “couldn’t move forward” unless she was honest with Shayne.

“I did have feelings for you. It wasn’t like I did not care about you,” she told Kyle. “I’m really sorry that it was led on more than it should have been.”

But the biggest bombshell of all was when Kyle said his “biggest regret” was not asking Deepti Vempati to marry him.

“The biggest regret is I should have asked Deepti to marry me,” he said. “That’s what I learned the most. I f—– up.”

Speaking directly to Deepti, Kyle added: “I should have tried harder for you.”

And it looks like the two are now dating!