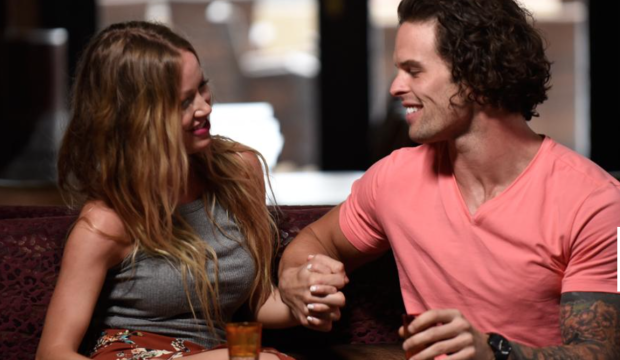 Yes against the advice of her family, friends and all of Canada, Jasmine chose Kevin W over Mikhel. But it was not easy for her.

As with all Bachelorette finales Jasmine still had not decided who she would spend the rest of her life with tonight on the finale. (It always comes down to the wire).

“I’m so confused and so unsure of what I’m going to do,” she says … and you know what? I actually believe her.

“It’s hard to love two people at once… I’m scared to make the wrong decision” — and you really should be Jasmine.

Jasmine actually pulls a Ben Higgins and tells both men that she has fallen in love with them. (They never learn!)

Last week Kevin W. walked out of the coveted Fantasy Suite date after the two had an argument about her feelings for runner up Mikhel. He did return the next day, but the damage may have been done.

“It’s hard for him knowing there’s another man in my life,” she says. “He walked out on me. And even though he came back and made it right, it brought up old fears. I can’t be with someone if I’m always afraid they’re going to leave.”

Yes, Jasmine has abandonment issues after her father died when she was 12 years old. Producers made that point very clear on the premiere.

Tonight prior to her final decision the men get one last date.

Jasmine takes her caveman to where else? a cave in Cuba.

There Jasmine confesses to Kevin that her family does not like him and that she’s afraid he will walk out on her during their marriage given that he has already walked out on her.

She tells him she is afraid that “he’s the type of person that’s not gonna face the problem and bail..its my biggest fear…I’ve experienced it twice so far.”

Kevin defends his jealousy and his decision to bail on Fantasy Suites saying he needed time to cool down and avoid saying something in the heat of anger —- which might be a red flag?

‘all these things she fears about me will get cleared away after this is all over”—-really Kevin?, I’m not too sure on that.

Next she takes sensitive and romantic Mikhel who is clearly really falling for Jasmine, claiming, “I really am falling in love with you” for his very last one on one. Like I said we are dealing with 3 Enneagram 6′s which means they all need certainty and security. So thankfully just in the nick (or should I say Mik) of time Mikhel gets the “certainty” he needs to go engagement ring shopping.

Cut to Kevin who very somberly chooses his ring worried that he may have to say goodbye to Jasmine the next day.

Finally the final rose ceremony begins. Jasmine waits patiently for her suitors on the Cuban beach and guess who arrives first?

Yep, poor, sensitive Mikhel! which means he is TOAST!

Jasmine starts crying immediately–which is such a bummer when you are about to propose to someone — telling him,

“I really feel like you are one of the best people that I’ve ever met in my entire life,” …..“I don’t know the last time anybody has made me feel as cared about and as supported as you have made me feel.”

“I feel like I’ve developed a stronger relationship with somebody else. And I feel sort of crazy for having to say goodbye to somebody as amazing as you. It feels wrong but I know that it’s right because you deserve the best and I know that you’re going to find that person and I know I’m always going to be a little bit sad about it.”

Oh man! Mikhel is devastated but bows out gracefully and waits until he lands in the car to bawl his brains out and eventually tells Producers he can not talk about it anymore.

Now comes Kevin who obviously has had some help writing his proposal speech since words are not his strong suit. He starts by saying, “If I ever see you sad, or I ever see you upset, I just want to be able to grab you so I can take it for you.”

“I really felt from very early on that you and I had something that I hadn’t felt with anybody else,” Jasmine tells Kevin. “There’s been this crazy electricity between us from the start,” (it’s called lust Jasmine).

She then claims that Kevin makes her feel safe. “You want to build a life with me, because I want that too,” she says. “I care about you so much, and I love you.”

Kevin gets down on one knee and declares, “I really love you a lot,” he says, kneeling. “This is the happiest day right now… will you marry me?”

Jasmine replies to his proposal with an enthusiastic “Yes!”

So are Jasmine and Kevin still together?

Stay tuned because things were looking pretty precarious at the After the Final Rose episode. And by precarious I mean both Jasmine and Mikhel admitted they were still in love with one another! Jasmine did not look happy and admitted things have been tough with Kevin.

Tomorrow a radio episode will air with the happy couple. Jasmine tweeted;

“Get ready for a SPECIAL EPISODE tomorrow with guest @LawyerDale! Laurelly herself cross-examines us & we do not hold up well”.

Also Jasmine posted next to nothing on Twitter on this glorious day when her and her new fiancee can finally emerge from months of hiding. That is a VERY BAD sign.

Really Jasmine? All you have to say is thanks to the Production crew? No shout out to your new fiancee? No photos of the two of you together in shrubbery outfits during your time of hiding?

I think there is a good chance Jaz pulls a Mesnick soon and changes her choice. Stay tuned.

UPDATE 11/23/2016: Jasmine and Kevin cancel all media interviews the morning after the finale