Spotted: Ben Flajnik and Courtney Robertson unhappily ever after 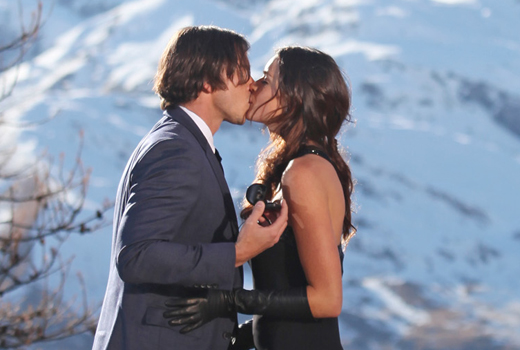 I love the latest update in Life & Style on Season 16 Bachelor Ben Flajnik and his “winner” Courtney Robertson. Apparently the two were spotted on March 18th, 2012 — just under a week after the dramatic season finale and the Chris Harrison “arm chair” After the Final Rose love consult aired — cruising around San Francisco and Sonoma as a brand new couple…and looking totally bored!

The two were finally away from cameras having a post-production one-on-one doing the things that regular couples that don’t have a hit ABC reality TV show do: milling around the park and dining with friends. Apparently the two were also spotted going to see an apartment, which may mean they’re considering moving in together?!? But, onlookers said the couple ultimately appeared bored. One even said,”they weren’t smiling, not like a happy couple.”

And here is my favorite part of the update: that same day, Courtney was seen at the park with Ben’s Jack Russell terrier, Scotch (who just happens to be one of our Twitter followers, BTW), but that she “didn’t play with the dog” and spent most of the time texting!

Animal Lovers, Unite! Unite against Courtney Robertson for foregoing her attentiveness for Scotch and instead burying herself into her phone. Can you imagine being followed by the paparazzi and having your every move examined and reported on? I mean….THIS JUST IN: COURTNEY ROBERTSON DOES NOT “PLAY” WITH BEN FLAJNIK’S DOG, SCOTCH! A-mazing!

Although, we do have to say that dissing Scotch in any way, shape or form — paparazzi ridiculousness or not — has got to be a deal-breaker with Ben. It certainly is for us. Remember how Ben brought Scotch on his first one-on-one date with Courtney, certain that Scotch would seal the deal between the two (all guys know they are adorable with their dogs)?

I knew Courtney was the winner at that point (aside from all the Reality Steve chatter), because Ben brought his beloved Scotch to meet her.

The rest of the weekend was reportedly filled with dull activities for the Victoria Secret model. On Friday night, they dined at Bobo’s Steakhouse for one of Ben’s friend’s birthdays.

One customer commented, “it didn’t seem like they were together; it seemed more like they were part of a frat party.” Life & Style also said “the following night, Courtney and Ben dined on scallops and Hawaiian tuna at Park Tavern with another couple. She dominated the conversation, and he was quiet.”

Uh-oh….this is not looking good. Ben, the enneagram type four, is not sounding happy. “Fours” get very quiet when they are having doubts. Sounds like he knows Courtney doesn’t really dig his lifestyle (meaning, in our opinion, his friends aren’t trendy Santa Monica hipsters and no matter how hard he tries, he just won’t ever be “cool enough” for her).

I’ve been saying from Day One that Courtney is not that into Ben! He’s just not her type! Review this previous post where we examined her body language from their first interactions. He likes to keep things real and she likes a lot of pomp and circumstance: dining at fancy restaurants, posing in front of a “step and repeat” at a movie premiere and needing constant admiration from her partner — and from any random onlookers for that matter.

But let’s not jump to any rash conclusions, people. Just because the couple has already broken up once since the show aired does not mean that this relationship isn’t gonna last. Remember the two dated for nine long weeks before deciding to be with one another “forever” and there are still a lot more “step and repeats” in their future. Don’t expect Courtney to give up the spotlight that fast. After all, she is still….”winning”!