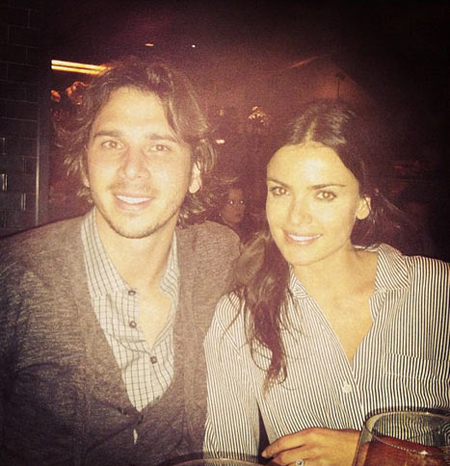 Ok – I swear I’m not trying to trick users into a click a la the highly annoying Bachelor Wetpaint website. I really, truly think former Bachelor Ben Flajnik and Courtney Robertson are DONE, OVER, KAPUT.

Why do I think this? Well, first of all, I never thought their relationship would last. Our opinion here at Ok! Here is the Situation was always that Courtney would “hang in there” as long as the events and step-and-repeats lasted. Afterall, she is an enneagram personality type 3, which means she LOVES the spotlight. But, we knew once the spotlight started to fade, so would her “love” for Bachelor Ben. That, and there’s no way Ben, who is an enneagram personality type 4, would be able to truly believe in Courtney, what she’s about and their relationship. It’s been a doomed match since Day 1, in our humble opinions. Just consult the enneagram and the fates of all of these Bachelor relationships will start to become more clear!

But, again, why do I think they’re broken up specifically now? I’ve had a hunch lately because I barely have a life and therefore I follow the two of them on Twitter….and they 1) haven’t been tweeting to each other at all for the past week or so (something they had previously been doing on a fairly consistent basis) and 2) they didn’t spend Memorial Day weekend together, which is a long weekend ripe for hanging out with your long-distance love (Courtney spent the weekend in Los Angeles and Ben stayed up north in San Francisco). But, again, Ok….so they haven’t been tweeting each other and they didn’t spend Memorial Day weekend together. What does that really prove? Well, that’s what planted the seed of my suspicion, but what compelled me to write this post was that Ben added much more fuel to my suspicions today on Twitter when he tweeted the following:

I know I’m late to the new season of The Bachelorette but I will be watching on Monday with everyone. Also, some updates from Courtney and myself to follow 🙂 Have a great weekend everyone!

Updates? What updates? The only update that I could foresee him updating us with is if there was something different about the status of their relationship to update us with. Right? I mean…if they’re moving in together or if they set a wedding date, I don’t think he’d tweet about upcoming “updates” so cryptically. So, we here at Ok! Here is the Situation are making an EARLY call on what this “update” is and we are putting GOBS of money on it being that: Former Bachelor Ben Flajnik and Bachelor Season 16 “winner” Courtney Robertson have broken up. And, paint us totally NOT surprised.

We watch these shows because we love LOVE and really want these couples to work out, but it just gets so frustrating when ABC picks either emotionally unhealthy and/or young and immature leads, which seems to result in them making BAD choices that are easy to see the doomed fate of from miles away. I mean…bring back more mature catches like Trista!! For the love of God, ABC! We need to help you with your casting!! 🙂