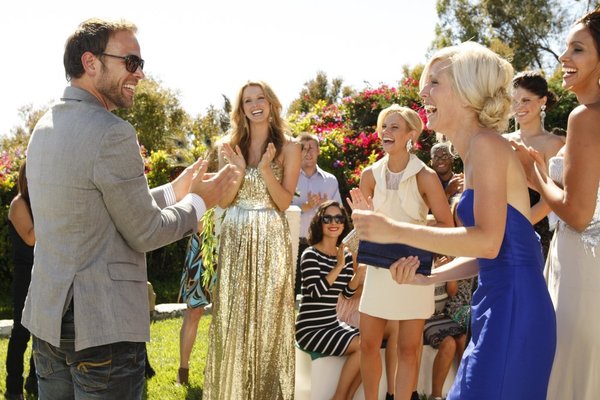 Wow! Wow! Triple Wow! Today’s post-cancellation, only-released-online episode of Ready for Love had the most amazing ending ever! And it has everyone running to their computers searching for: Ernesto and Shandi still together?

Thx 4 ur support. I did find love on @readyforlove. My feelings were real but things didn't work out. Plz respect our privacy on this matter

First of all, I am hoping it was an amazing enough episode to potentially pull this show out of the cancellation crapper and put it back on prime time for another season. C’mon, NBC!!

Anyhoo, back to tonight’s episode….

Even though tonight was the night the guys — Tim, Ben and Ernesto — were supposed to narrow their bevy of amazing ladies down from three ladies to two, Ernesto Arguello decided to make one of the most romantic overtures in this-isn’t-the-bachelor history by saying goodbye to both Alba Reyes and Kristin….and then scaling the cube wall to reach his final choice, Shandi Finnessey.

It was freaking romantic!

So, the super sleuthers are out in full force trying to figure out if Shandi and Ernesto are still dating. And, although there’s quite a bit of confusing evidence and rumors swirling around out there, my gut is telling me that they aren’t together. A lot of the evidence is coming from Twitter. I know the contestants can’t say whether or not they were chosen and if they’re still with their guy, but, if Shandi were still with Ernesto, you’d think the two of them would be saying something on Twitter today, now that the cat’s out of the bag that he picks her. And, there’s nothing. It’s all just Shandi thanking people for telling her they liked the episode.

Then, there are people on the BachandBachette forums that are claiming they have “sources” that have told them the couple broke up last November (the show finished taping in August of last year). This intel isn’t very solid, but….it’s more information than I’ve seen elsewhere.

And, of course, there are still the claims swirling around that Ernesto is in fact now dating show producer Eva Longoria. I don’t really believe those rumors necessarily, but I do get the sense (because, you know, I have super reality e-lister spidey stalker sense) that Ernesto Arguello and Shandi Finnessey are now broken up.

What do you guys think? Have you dug up any other juicy nugs that might clue us in? If we can’t piece this together before next week, I’m sure we’ll at least find out something more about their status next Tuesday. But, I want to know FOR SURE now!! 🙂

I’m really hoping my gut is wrong and that they ARE still together though because I love LOVE and Ernesto’s gesture tonight on the show was SO ROMANTIC!

In the following clip at around 47 minutes Shandi talks about her relationship with Alba on the show. She claims that it didn’t bother her that Alba came back because she knew she had such a strong connection with Ernesto, but she didn’t like the manner in which she came back.

Shandi talks about her reason for going on the show. She claims she had gotten out of a relationship a few months before…one that she thought would really progress, but was blindsided. Shandi says its really hard dating in LA. And, she says, “if nothing else it was an incredible  learning experience”……which doesn’t make it sound like they are still together.

Watch for yourself below:

13 thoughts on “Are Ernesto and Shandi still together and Ready for Love?”