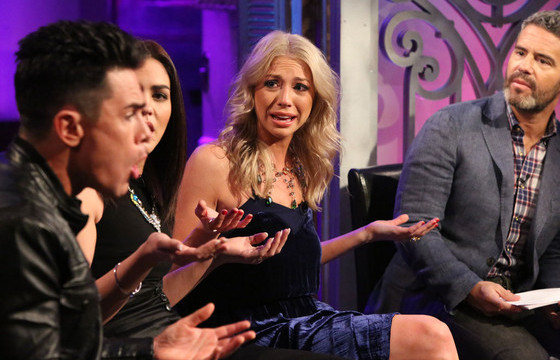 “What I did was f$$$ing so wrong, but it doesn’t make it right for him to continue to f#@k around my back.”

“Here’s how I feel. I don’t hate Kristen whatsoever, but I do feel like it is extremely hypocritical when for months everyone’s life was made a living hell about something that was really small that happened between Tom and I almost three years ago–(Kristen interrupts) small to you Ariana, small to you–I’m talking. He made a choice to cheat on me…”

Ariana continues: “I do feel like it’s hypocritical, it’s like a diversion tactic because then everyone’s focus is on me–then no one is questioning the whole thing with Jax.”

Tom is allegedly dating Ariana according to our source.

‘Tom and Ariana are hanging out. About an hour after the finale he started following her on Instagram…..It is official that Tom and Kristen have broken up. They are all still working at SUR and Ariana still works at Villa Blanca as well. I think after the reunion show next week, Tom and Ariana will make it official. Jax Taylor did tweet his fans about two weeks ago saying  “ You will never believe who is hooking up at SUR, even I can’t believe it!” I will hopefully know more in a couple of days.”

This should make for an epic season 3, but it looks like Stassi Schroeder is out since she has moved to NYC to be with boyfriend Patrick Meagher and will be replaced by Jax Taylor’s new girlfriend model Carmen Dickmen aka Carmen Leslie. The two have been spotted out multiple times.