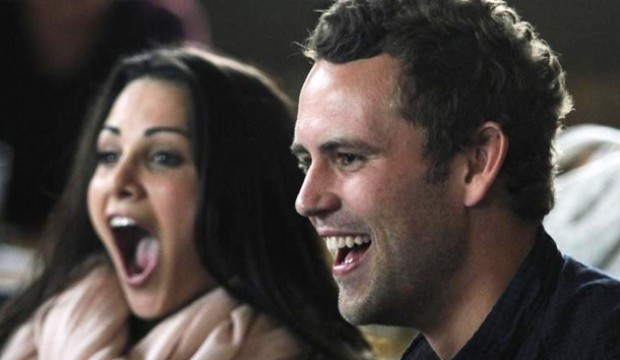 Last night on After the Final Rose 33-year-old runner-up Nick Viall attempted to persuade Andi Dorfman to pull a Jason Mesnick and dump fiance Josh Murray and choose him, but it back-fired. Once Nick was shut down by Andi, he got mean and took a shot at the Bachelorette….asking her “why she slept with him” aka revealing that she DID sleep with him to the world and most importantly to her new fiance.

“To each his own… If that’s what he needed, the last dig, then that’s fine. We’ve left that in L.A.”

The couple also spoke to ABC news about the situation.

“It wasn’t the most tasteful route,” Dorfman explained. “But that doesn’t negate the relationship I had with him.”

“It was very classless and disrespectful and it just shows the type of person he really is,” …. “I don’t associate myself with those kinds of people and neither does Andi. … He’s of no concern to us or our lives.”

Here is the infamous video…..

Nick claims that he did not plan to ask her that question in front of a live audience, nor did ABC producers prompt him do so. And I believe him. Nick is an Enneagram 3. Three’s get really nasty when they get hurt and shut down and they realize they will not be getting what they want. He was hurt and went into victim mode calling her demeanor on the show “cold”.

Big mistake Nick! The Enneagram 1 does not respond well to that. You suggested she was “bad” for sleeping with you and that is a serious button with that type! One’s can be viscous when they think they are being attacked especially if you are implying they were “bad” and lacked integrity.

“I didn’t want, in any way, to humiliate her or make her feel that way and I feel very sorry if she did feel that way,” he told reporters. “When people break up like that, those are the questions people want to know… [and] unfortunately that was my only opportunity to [ask].”

But the couple isn’t focusing on the awkward comment. They are way too busy planning their wedding for next Spring which I am guessing Nick will not be invited to!

“I looked at a couple pictures, wedding dresses obviously.” Josh added, “I’m excited about that. She’s thinking about it. We’re thinking probably spring next year.”