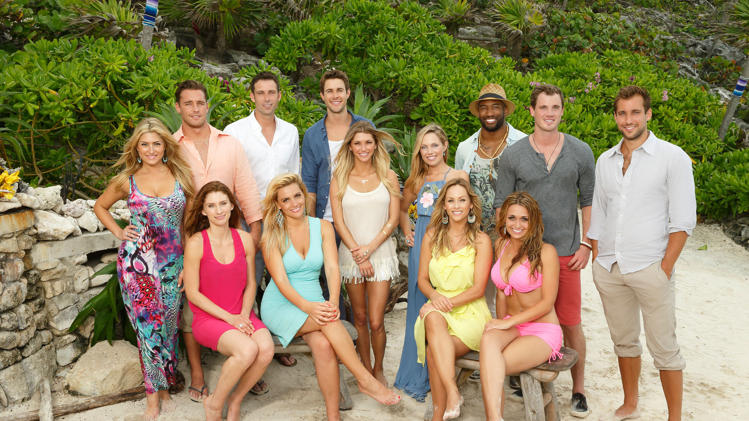 Tonight on the premiere of Bachelor in Paradise fourteen ex cast-members of The Bachelor/Bachelorette head to the Yucatan and the small town of Tulum, Mexico to find LOVE! And the situations BEGIN!

Legs are being thrown in late night ocean dips, love triangles emerge, a Mexican raccoon becomes a shoulder to cry on for Clare, legs are even broken!

The group is welcomed by situation arbiter and host Chris Harrison who explains the “one shocking detail” – “At the end of the week, anyone who is not in a romantic relationship will be sent home.”

Michelle Kujawa claims she “may be” single. Hmmmmmmm

Ashlee Frazier claims she has come on the show to meet Graham Bunn…..and NO one else.

The show doesn’t waste any time—and they can’t since they are only there for 3 weeks–and they have the alums break off in to couples and head out on dates.

The drama begins with Clare Crawley–where it always begins— she receives the first date card and wants to ask out Graham Bunn but Ashlee Frazier already has dibs on Graham. So after confiding in a Mexican raccoon about her “situation” Clare opts to ask out Robert instead and the two go and explore the “ancient and majestic Tulum Ruins” before taking a dip in the water–ut oh! Remember what happened last time she took a “dip” in the water on The Bachelor?

Lacy has a crush on Marcus, but is worried that he is fresh out of his relationship with Bachelorette Andi Dorfman. And Robert Graham has a big crush on Lacy. So we have our first BIP love triangle.

Sarah Herron gets the second date card and decides to ask out Marcus Grodd, but Marcus has already developed feelings for Lacy! — make it a love trapezoid. Marcus, the consummate gentleman, accepts the date and the two take a trip to Coba to “rappel into Tankah-ha Cenote” underwater sinkhole.

The third date card belongs to a surprise arrival….Michelle Money, bad girl from Jake Pavelka’s season. Michelle arrives and takes her ex Graham Bunn on a walk. WE aren’t sure what they discuss, but they obviously don’t rekindle anything. Michelle seems worried that if she doesn’t make a connection fast she will be sent home and she packed FIVE bags! So Michelle chooses Marquel Martin and the two enjoy a romantic horseback ride on the beach of Playa del Carmen.

Elise Mosca hits it off with Dylan Pettit which makes sense because her last boyfriend was “The Situation” from Jersey Shore and Dylan has kind of a “Situation” vibe.

The rose ceremony was amazing! Before a rose could even be handed out Michelle Kujawa proclaimed that she was leaving the show because she had not made a connection with anyone in the first 24 hours!

The show leaves us on a serious cliff hanger in regards to who Michelle Kujawa hooked up with and how it “ended in tragedy”? All we know is that the 4th wall comes crashing down next week and ABC staff has to handle a “serious situation” involving Michelle and a guy with 2 broken legs!

At the end of Episode 1 there were six couples left. Danielle McBride is given the boot. The remaining couples are: Graham and AshLee, Marquel and Michelle Money, Marcus and Lacey, Ben and Clare, and Dylan and Elise.

5 thoughts on “Bachelor in Paradise Premieres and the situations begin!”