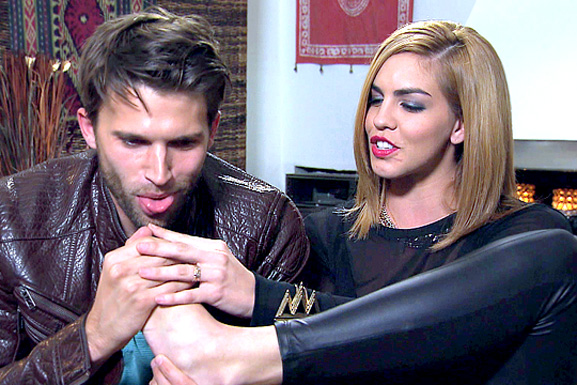 Thanks to Bravo’s editing Katie is best known for her drunken outbursts and overshares. And thanks to Katie we all know what “motor-boating a D” means.

In all seriousness, Katie is more than just a pretty face and she is not always drunk.

She was born Katie Marie Maloney on January 16th, 1986 in Park City, Utah where she grew up, to mom Teri Noble Maloney and father Richard Maloney. She moved to LA more nine years ago to pursue an acting and modeling career. And believe it or not she was single for her first four years in LA.

Katie has 2 brothers: Joey and Rocky. Joey studied Directing at Los Angeles Film School and is now a Digital Features Producer at NFL.com.

Brother Rocky runs his own photography business and is dating girlfriend Lindsay Nicole. Her mom Teri is a realtor in Las Vegas–not sure if mom and dad are still together or not.

Katie’s passion is in music and she began interning at a record label in LA. And interestingly when the show started Katie had already been working at SUR for five years. Although now she is very much ‘part time’ at SUR. She is working on her own style blog Pucker & Pout.

Her and boyfriend/now fiance Tom live together in West Hollywood. The two get engaged on this season of Vanderpump Rules despite the cheating scandal last season where Tom admitted to cheating on her with Tiffany Matthews best friend in Las Vegas.

The entire cast of Vanderpump Rules have grown in to household names and all are using their new found fame to pursue the careers that they actually want–I know, it’s hard to believe these kids don’t want to work at Sur forever! But for now Katie is still serving at Sur and we get her for at least one more season.

2 thoughts on “Who is Vanderpump Rules star Katie Maloney?”